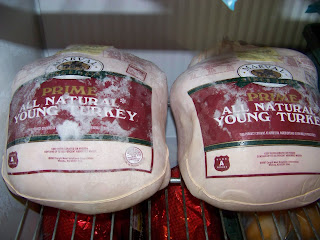 These two turkey's (14.59 lbs. on the left, 15.58 lbs. on the right) now reside in our freezer. I had read on some other blogs that Wal-Mart (a store I try to avoid at all costs - sorry all you Wal-Mart lovers!) was doing something crazy, like selling turkeys before Thanksgiving for $0.40/lb. Then I read a news article (HERE) that Wal-Mart was claiming they could help their customers have a complete Thanksgiving meal for 8 people for $20. Well, I couldn't let that pass me by. I didn't need the rest of the fixings, but we're the kind of people who are up for eating turkey any time of the year.

So when Peter got home from work today, we drove down there, he dropped me off, and I ran inside to the meat department to see if this was really the case. Sure enough - in one of their meat bins - turkeys for $0.40/lb. Now let me tell you, I have the upmost respect for older people - but those little silver-haired people can be downright pushy when you're standing between them and their cheap turkeys! I was literally "ooched" out of the way by one elderly gentleman. Never-the-less, I managed to grab my two turkeys (because there is a two turkey limit) and carried them up to the check out. That's when this happened: 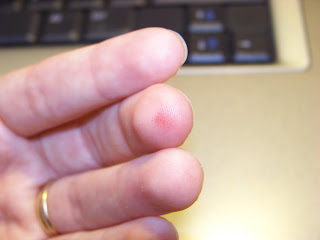 I don't know if you can tell from this picture, but basically I got a very painful blood blister on my middle finger (which happened to be almost numb at the time from carrying two frozen turkeys up to the checkout from the meat department - Note To Self: Next time, get a cart!). I was trying to set the turkeys down on the checkout counter and I dropped one of the turkeys on my finger. It's called, "talent", people. It was the kind of "OUCH" moment that makes you tear up without meaning to - so while trying to look like everything was OK, I was screaming inside my head. :-) However, once I was handed my receipt for my 30.17 pounds of turkey and saw this... 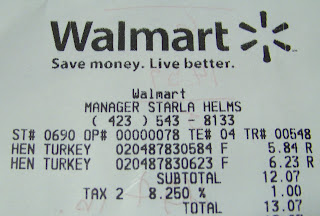 ...I felt much better. :-) Actually, my finger still hurts, but I can bend it, so it must not be broken. Yay for that!

In the mean time, go check out your local Wal-Mart and see if they still have some of these turkeys. I read one post that suggested a way to get around the two turkey limit was to buy two and give your spouse two to buy in another line. However, I'm quite happy with the two turkeys that are in my freezer and I'm willing to give everyone a chance at this deal. I can't believe I'm saying this, but...