Friday $avings: The "It Never Hurts to Ask" Edition

This year is a big one in our family. My parents will be celebrating their 50th wedding anniversary, my brother and sister-in-law will be celebrating their 20th anniversary (both this fall), and Peter and I will hit the big 1-0 wedding anniversary in June. If you were to ask me where the last ten years have gone, I really couldn't tell you. {Poof} I can tell you that they have been ten, adventure-filled years that have taken us to the ends of the earth and back home again. I'm so blessed and I wouldn't change a thing. 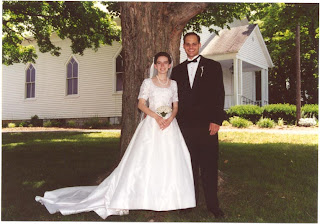 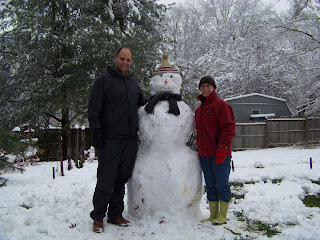 LEFT: Who is that young couple? Our wedding day in June 2000; RIGHT: Here are those same nuts with their snowman almost 10 years later.
So with 2010 being such a big year for my family, we started talking last year about what we wanted to do to celebrate this year. When there are 15 people trying to make a decision, you know everyone is going to have a different idea and a different budget. Some wanted to fly the family to a tropical island, some wanted to go to the land of Mickey Mouse, and others wanted to take the family on a trek in Asia. All of them were budget busters for us. We finally settled on going to the South Carolina coast...if we could find a house big enough for all of us with the required amenities: oceanfront, 7 bedrooms/bathrooms and a private pool - all during specific dates in the busiest vacation month of the year. Good luck!
However, after much time spent surfing the internet and finally becoming so frustrated that my dear hubby took over the search, we managed to find a beautiful home that had everything on the list. However, my mom had given a price point that she didn't want to go above if she could help it. Since I was in charge of finding and booking the place, I spent two days talking to the rental agency. They gave me one drop in price after I explained what we were celebrating, but it was still more than we wanted to pay. After a moments hesitation, I asked, "She really wants to keep it in the $--- range, is there any other discount you could give to get it in that range? I figure that it never hurts to ask." After giving me the whole, "we've already given you one discount" speech, they told me they would make a phone call and then call me back in 10 minutes. By the time we were done, I had gotten almost $1500 knocked off the price of the house - exactly what I has asked for when I called.
Moral of the Story: It never hurts to ask for a discount and then a bigger discount! In this economy, they knew if they gave us a bigger discount we would rent the house - guarenteed. Or, they could leave the price where it was and the house might sit empty during the week we wanted it. Guarenteed money (with a smaller profit for them) is better than none at all.
Come this summer, we'll be sitting at the beach enjoying this view... 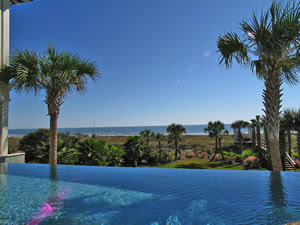 ...I think that will be worth the two days of searching and talking and haggling over the cost, don't you? :-)
For more money saving tips, pop on over to Life as Mom today - lots of great linkups!
Email ThisBlogThis!Share to TwitterShare to FacebookShare to Pinterest
Labels: Financial Stewardship, Travel