Friday $avings: Learning How to Cook

There's just two of us...my hubby and me. When we first got married almost 10 years ago, I cooked like there were sixteen of us and apparently none of us liked good food. Thankfully, I married a man who loves to cook and he was able to help me learn how to cook meat and tell when the chicken was done and not to be afraid to try something - adding a spice or making do with what I had on hand.

After the first year of my cooking learning curve, I was confident in my ability to make certain dishes (which I called my "no fail food") and continued to make them ad nauseam. A couple of years of this and poor Peter finally requested that I enlarge my recipe options and make more than lasagna or Cranberry Chicken when we had company come over because he was tired of those dishes. My first reaction was anger and hurt, and then I realized that I was also tired of those dishes. Hmmm...

Skip ahead another year or two and we found ourselves living all over the world and trying to figure out what meals we could make with what was available and without breaking our very small bank account. :-) It was during this time (4.5 years) that I really learned about experimenting and breaking out of my normal cooking routine. I tried new foods, dealt with the flops, practiced "from scratch" cooking and baking, and worked on being a more flexible and well-rounded cook.

For the last year we have been living back in the United States - land of fast food and convenience. As we were both struggling with losing weight, we finally decided to try the South Beach diet, which meant I needed to rethink the way I cooked and what I purchased. No more cheap pasta and large bowls of rice. No more box mix desserts and Edy's Loaded Nestle Tollhouse Chocolate Chip Cookie Dough Ice Cream. No more fast snacks and sugar-filled breakfast foods. Fresh vegetables and dishes that had a heavy emphasis on meat were the order of the day. And so once again I have found myself transforming as a cook and figuring out ways to work the recipes that we love around the diet that we can eat at a price we can afford. And you know what? It's been fun!

Two weeks ago I looked into the freezer for dinner inspiration and saw a bag of frozen chicken breasts. As they had been in there for quite some time and I wanted to make room for other stuff, I pulled them out and thought about how I could fix these in a new way. I ended up chopping up some fresh tomatoes, onions, and green bell peppers, adding taco seasoning, cumin, and minced garlic, and after mixing it all in a bowl, I poured it over the chicken and baked it for an hour. YUM! 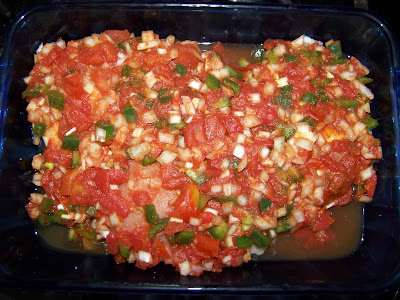 The next night I had leftover chicken with topping - but I didn't want to just serve the same thing. What to do? Taco soup! I pulled the chicken apart and dumped it into a pot with the remaining tomatoe/onion/pepper topping. Then I pulled a bag of frozen tomatoes (from the garden) out of the freezer and prepped those to add to the mix. I threw in some beans, more onions and peppers, and seasonings into the pot and let the thing simmer until Peter came home from work...it was a BIG hit. 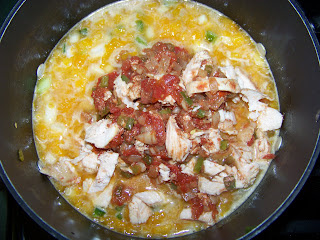 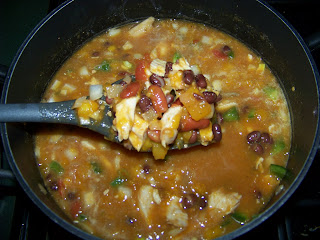 OK, so if you're counting, that's two meals out of one, but I ended up getting 4.5 meals total! Once I added all the tomatoes and vegetables and beans to the chicken mixture, I had enough made for the meal that night, plus one container in the fridge and one container in the freezer (to pull out later), and each container is enough for a meal for the two of us. A couple of nights later we ate the leftovers that were in the fridge, and because I didn't finish mine, I ate the rest of it for lunch the next day...which really makes 4.5 meals!

I love foods that stretch, but I like to make them a little different each time so that we don't get bored eating the same old thing night after night. My dinner guests never know what they're going to get now, which is just the way I like it. Thankfully, I married a good teacher. :-)
Email ThisBlogThis!Share to TwitterShare to FacebookShare to Pinterest
Labels: Financial Stewardship, Marriage, Personal