NOTE: I originally wrote and posted this in March 2010, which means that since then I found a job, worked at that job for 15 months, and will be quitting said job this coming Friday (5/4/12). However, this post is the first one that I thought of when I heard about Anne's link up on books that have changed your life, and as I re-read it, I still stand behind everything I wrote two years ago. I still highly recommend John C. Maxwell's books, especially if you are looking for personal growth and encouragement to change what's not working. To see what other books have been life changing for folks, make sure you visit Modern Mrs. Darcy's "The Book That Changed My Life" Carnival!

{Begin Original Post - 3/23/10}
I started to name this blog post, "The Eeyore Syndrome", but then I figured that wasn't entirely true (and there might actually be such a thing in this day and age of syndromes!). A.A. Milne's character - Eeyore - was in a continual state of gloominess. Nothing was ever going to work, no one would come to his party, his tail was always going to fall off, and no one was going to notice him. Do you know people like Eeyore? I do. Have you had days when you have felt like Eeyore? I have. 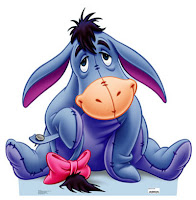 If you've read any John C. Maxwell books, you might recognize one of his books in the title of this post, Failing Forward. I first read Failing Forward: Turning Mistakes into Stepping Stones for Success in the fall of '09 after applying for a job - thinking I had it - and being turned down. I felt like a total failure and kept looking at myself and wondering what was wrong with me. Enter Maxwell's book and a new way of looking at things. {Light Bulb Moment}

A friend of ours turned us on to John Maxwell back in 2007 when we were living in Indonesia. Peter was looking for ways to work on his limited leadership skills and our friend recommended that he read The 21 Irrefutable Laws of Leadership. It was life changing for Peter - and consequently, for me as well. We continued to travel around the world and on our next to last trip we had such a negative experience that we came home burned out and very angry. We stopped to see our friend (who was in the States at the time) on our way out to discuss the issues with mission leadership. After spending an evening listening to us rant and rave, he asked us to come back and have breakfast with him in the morning on our way out of town.

As we were leaving the next day, he gave us another Maxwell gem, Be a People Person, and asked us to read it before we talked to the leadership. For the next two days as we drove to our destination, I read it out loud to Peter and by the time we arrived for our meetings, we had a new perspective and a new way of presenting our frustrations. The goal was no longer to tell them how stupid they were and then leave, the goal was to try to get them to see the problems and promote change. Although the change didn't occur at that moment, we were able to leave with the knowledge that we had calmly and rationally presented the problems and it was now out of our hands.

You might be wondering, why all the background? Well, first of all, I can't tell you how important it was for us to have one friend who was willing to listen, not to judge, but to recognize that we needed encouragement and to give us Maxwell's book to read. Our friend understood that it wasn't about acting like you have it all together (who does?!), but it's about encouraging those around you that they are not alone and even if you only talk once a year, you're still along for the ride. We continue to grow and develop, and much of that is because we had a friend who was willing to confront us in a loving way - but not just confront, also give us the tools to change.

We have since turned around and handed out books of our own. Rather than tell the recipient how much they need the book, we tell them how much we needed the book(s) and how they have helped us develop our leadership and people skills - which fits in with our beliefs as Christians. Part of becoming more Christ-like means taking a genuine interest in His people - something we're still learning how to do!

So - after going way around the subject of the title - we're back to why I'm learning to Fail Forward ... again. In my job search, I applied for several jobs - cashier at a grocery, salesperson at a home improvement store, temporary secretary at a university, and various positions that would use my college degree at a large company. On all counts I was either turned down for the positions or not even called. I won't lie - it shook my confidence and totally squashed what little ego I had. After having a great interview and thinking I had the job, I was rejected due to company politics. Delightful, eh? I ended up spending two weeks in an Eeyore mood with a side helping of pity party. No one wants me. No one thinks my degree is worth anything. They'll hire Dick or Jane before they'll hire me, even though they are less qualified. I feel worthless.

And then one day Peter had enough of my sob stories...and for that matter, so did I. I started thinking about the principles in Failing Forward and how I could either wallow in my misery, or I could stand up, brush myself off, and move forward. Like so many other things in this life, it was my choice! I chose to stand up and move forward. Plans A, B, C, and D didn't work? Well, let's start working on Plan E! I remembered that failures were a part of life - everyone has them. The difference between a person who is a failure and a person who experiences a failure is their reaction to the failure.

If I continued to sit at home and have a pity party, choosing to believe that no one wanted me and there was nothing I could do to change that, then I would truly be a failure. If I believed the world was against me and I was in no way part of the problem, then I would fail again as I missed the opportunity to learn something and make changes. However, if I did a self-exam and found things I could work on that might help me next time, then I was failing forward.

I also spent some time reminding myself that I was anything but worthless! First and foremost, I am a Child of God, and how could anyone be worthless if the Maker of the Universe created and loves them? Not possible! Beyond that I have a husband who loves me and wants the best for me, who chose me as his mate, and who believes that I have talent and ability to do something great. He pushes me to be my best and he doesn't let me sit down and quit. I have parents who support me and who were appropriately (and encouragingly) appalled when the jobs I applied for went to someone else. I am blessed!
So once again I am learning to Fail Forward. I'm reminded of the song from the 1936 Fred Astaire/Ginger Rogers movie, Swing Time:

Nothing's impossible I have found, When my chin is on the ground,
I pick myself up, dust myself off, start all over again.

Don't lose your confidence if you slip, be grateful for a pleasant trip,
And pick yourself up, dust yourself off, start all over again.

Work like a soul inspired, till the battle of the day is won
You may be sick and tired, but to be a man, my son.

Will you remember the famous men, who had to fall to rise again
So Take a Deep Breath, Pick Yourself Up, Dust Yourself Off, Start All Over Again...
Email ThisBlogThis!Share to TwitterShare to FacebookShare to Pinterest
Labels: #WorkInProgress, Bookworm, Personal