I'm back with a Wednesday Book Recommendation - and yes, it is another "children's" book, but one that I love. It's also another one that my oldest sister recommended and gave to me many years ago and which has since then become one of my favorites. 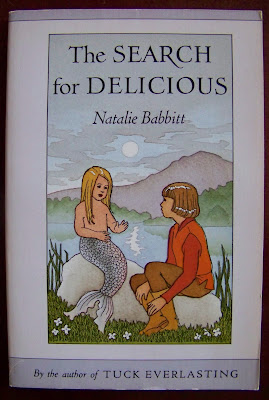 Today's book is The Search for Delicious by Natalie Babbitt. The book begins with a brief history of the dwarves and woldwellers and Ardis the mermaid and how they were forgotten when men came along to rule. Think of it as similar world to Tolkien's Middle Earth - only on the level of a child. You might wonder why Babbitt begins the story with the sad tale of a mermaid losing her doll, but trust me, it all factors in by the end of the book.
The main story starts by introducing the reader to DeCree, the Prime Minister, and his Special Assistant, Gaylen. DeCree has decided to create a dictionary, but he invites trouble when he defines "Delicious is fried fish" because no one, from the king down, can agree on the definition of what is "Delicious". In an effort to prevent a civil war from breaking out, DeCree sends his assistant, Gaylen, around the whole kingdom taking a poll of what is the most delicious. As Gaylen travels from town to town, the bickering and fighting get worse over the simple definition - mothers turn against sons, husbands against wives, and friends against friends. Everyone has an opinion and no one can agree. Our villian - who happens to be the queen's brother - takes advantage of the bickering and fighting to begin a real civil war in an attempt to take over the kingdom. Gaylen grows more and more frustrated by the silliness of the townspeople throughout the kingdom as he watched them fight over this simple thing. At one point, he's ready to move into the mountains and never deal with people again - but you know that doesn't end up happening or we wouldn't have a story! :-)
This plot is indeed "delicious" as we follow Gaylen on his journey, watch the kingdom come to the brink of war, rejoice as logic prevails and Gaylen comes home a hero, "Delicious" is finally defined to the satisfaction of all, and Ardis is made happy once more. We even get the satisfaction of an Epilogue that tells us what happens to Gaylen after he grows up (something I love as the "end of the story" reader!). All in all it is a wonderfully written children's novel and I would highly recommend checking it out from your local library or purchasing it for your own bookshelf (Amazon Associates Link).
For more book lists, check out the Booking It program that Jessica (Life as Mom) is hosting this year. Lots of good reading lists and ideas.