My favorite store is Target. Has been since the day I first stepped foot in one some fourteen years ago. I avoid going into Wal-Mart if at all possible, but the last time I had to stop for something, I was surprised by how much their prices had gone up - Target's prices were actually lower on several items. Plus, Target is a fun store with friendly, helpful employees, good lighting, carts that roll, and tidy bathrooms. And as a bonus, they do the "Buy # items, get a $5 gift card" deals, which, in my personal opinion, are wicked awesome! (Hello Boston friends!) Most of the time the deals center on household items that I would buy anyway...toiletries, cleaning products, laundry detergent, papergoods, etc. This week I scored on two of Target's gift card deals...so pour yourself a cup of coffee and let me tell you about them! :-)

I know there are people who frown on using paper towels for various reasons, including financial. While I'm all over switching out my lightbulbs (not because I'm concerned about saving the planet, but because it saved me money on my electric bill), I'm not giving up my paper towels. This week at Target they were running a deal on Bounty: buy two packs, get a $5 gift card. I'm not brand loyal when it comes to paper towels and I typically buy Target's Up & Up brand because they are cheaper and work just as well. However, in addition to the $5 gift card, they had also lowered the price from $12.49 for 8 rolls ("like getting 12" according to the packaging) to $9.99. The same type of paper towels from Up & Up were $10.49, so I was saving $0.50 by going with the Bounty brand...AND getting $5 back. I purchased four packs and got $10 back in Target gift cards. That afternoon I was thinking about it and remembered that when I stockpiled on toilet paper back in December, the toilet paper packaging advertised $15 in coupons inside. [DING!] I pulled down the packages and dug around until I found all the coupons which then gave me another $1/1 of Bounty towels. Back to Target we went and I purchased four more packs of paper towels (because I know these are things I will buy anyway and so why not get them for cheaper and get money back?!) and came home with another $10 worth of Target credit. HAPPY DANCE! 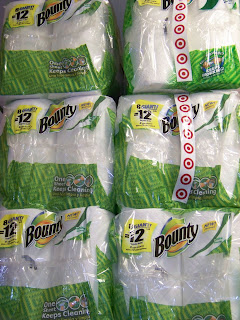 On Thursday I went back to Target with my mom and we cashed in on the other gift card deal of the week: Buy three packages of Huggies diapers and get a $5 Gift Card. We were in the market for some baby gifts and I figured that in this day of de-cluttering and frugality, what could be more practical than diapers? Huggies were on sale for $8.99 a pack and I had two $3/1 coupons for Huggies, which brought two of the packages down to $5.99. I kicked myself slightly (OK, a lot!) because we were in town on Tuesday but I forgot to bring my Huggies coupons - and when I looked at them this morning, two of them had expired on Tuesday or I would have gotten all three packages for $5.99. Oh well...these things happen, right? :-) We went home with a nice baby gift and a $5 gift card in pocket...love it!

These deals don't always give you the rock bottom price, but I'm never one to turn down free Target cash when I get the chance AND I have coupons to help sweeten the deal. The paper towel stash I purchased in December kept me going through the end of April, so almost five months, and this stash should take me through the end of the year. In the meantime, I'm setting the giftcards aside for Christmas shopping...whoo hoo! :-) For more great deals and Mother's Day gift ideas, check out today's Frugal Friday post over at Life as MOM...Happy Friday!
Email ThisBlogThis!Share to TwitterShare to FacebookShare to Pinterest
Labels: Financial Stewardship