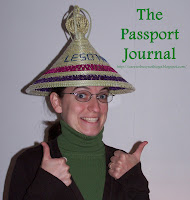 When you travel outside of your home country you are bound to make some language "boo-boos" along the way. After working in six African countries and three locations in Indonesia, let's just say we know enough bits and pieces of various languages to be very dangerous. One of the down-sides to our way of life (nomadic missionary mechanics for 4.5 years) was that we never stayed in one place long enough to either:
1) Attend language school
or
2) Get a semi-firm grasp on the basics to help us get around
Although we learned the greetings, "Hello Sir/Ma'am", "How are you?", "How much does this cost?", "I don't know", "I am well" "1,2,3,4...90, 100, 200" - that's about as far as we got anywhere we lived. It truly is amazing how far English and hand gestures can take you in this world (although I believe that learning the local language is VITAL if you are planning on working in country for an extended period of time). We even managed to get by in northern Mozambique (Portuguese-only) with Peter's Spanish and the help of our friend Casimiro who worked hard to understand Peter's Spanish/Portuguese mix. :-) 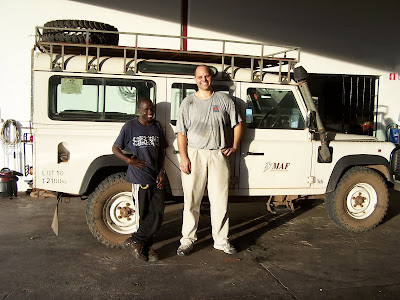 Peter with our friend Casimiro in Nampula, Mozambique
However, language mistakes are bound to happen. Prior to leaving for Indonesia I knew we would be in country for at least five months and I was determined to attempt to learn the language (enough to get around). We purchased a CD-ROM language program for Bahasa Indonesia (the language of Indonesia) which I listened to on our computer...I almost made it through lesson 5. I also had the Lonely Planet Indonesian Phrasebook which I carried with me everywhere we went. We attempted some tutoring once we arrived in Indonesia, but most of the time we ended up laughing with our language teacher and telling her about life in America. Needless to say, my grasp of Bahasa Indonesia was less than stellar.
Shortly after we arrived in the fall of 2007, some friends took us to visit their Muslim friends for the celebration of the end of Ramadan (the month of fasting - the end of Ramadan is called Idul Fitri in Indonesian). The general idea is that you go from house to house (or business) of your Muslim friends, eat lots of food, visit, and then move on to the next location to eat and visit more.
At stop number one of the day we were still trying to figure out what was culturally appropriate while we smiled and nodded and our friends explained that we spoke only English. By house #2, I was feeling a bit more confident and decided that the next time someone spoke to me in Indonesian I could tell them myself that I didn't understand Indonesian. Thankfully, before I whipped out my amazing language ability I tried it out on our American friends (who spoke the language).
"Saya tidak monyet bahasa Indonesia" I quipped to our friend, fully expecting him to be impressed with my self-taught language ability. Instead, our friend got a strange look on his face which turned into a chuckle. "What did you say?" Taking a breath I started again, "Saya tidak monyet..." More chuckling. At this point I knew I had messed something up. "What are you trying to say?" asked our friend. "I do not understand Indonesian." I told him, feeling much less sure of myself. After he recommended that I just say it in English and they will get the idea, we finished eating, thanked our hosts (I did know how to say "Terima kasih banyak" - Thank you very much) and got back in the car.
That's when the laughing started.
Apparently the word for "understand" is "mengerti" - and because I was butchering the pronunciation, it sounded like I was saying "monyet" which is Indonesian for "monkey". So had I pulled out my brilliant phrase, I would have proudly informed our hosts that "I don't monkey Indonesian" - which I pointed out would also have let them know that I didn't speak or understand the language (obviously!). Fortunately I tried it first on our friend and saved myself some serious embarrassment. :-) 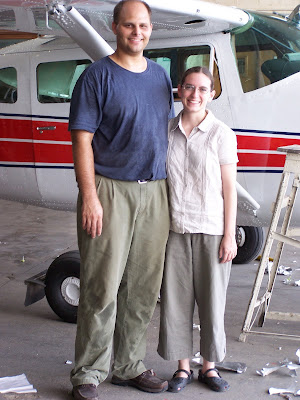 Here I am visiting Peter at a hangar in Papua, Indonesia

Email ThisBlogThis!Share to TwitterShare to FacebookShare to Pinterest
Labels: My Faith, Personal, Travel