It has been a while since I did an update on how the South Beach diet way of eating has been going for us. On January 26, 2010 I posted a picture of a skirt that I had dreams of one day wearing again. April 20, 2010 I posted an update and proved that I had lost enough weight to get in the skirt again, but I still wouldn't leave the house in it. My goal was to be able to wear it by our 10th anniversary in June, but when the 17th came around I didn't wear the skirt because A) It was June and it was HOT and B) We made BLT's at home to celebrate 10 years. I know - stand back, our idea of "big party" might be a bit too much for you. ;-) So while I didn't wear the skirt on our anniversary, I am pleased to show you what I did fit in again after 10 years... 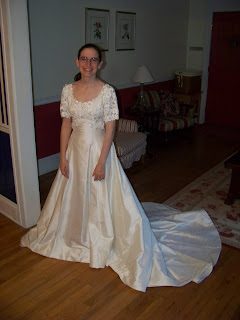 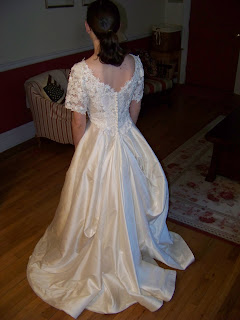 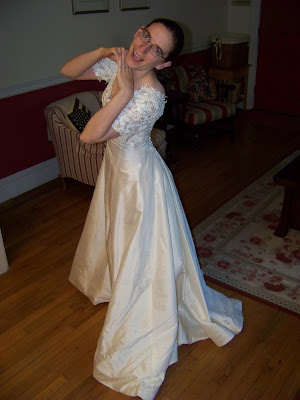 (ABOVE) In it, breathing, and being a total ham
So...what about the skirt? Well, a week ago I decided to find out if I had reached a weight that would allow me to leave the house without feeling like my skirt was at a breaking point! And by the way, I have basically stopped losing and have reached a healthy weight for me - so no comments about, "why do YOU need to be on a diet?!" - I'm just eating healthy and exercising now and all in support of hubby who is still trying to lose weight (and side note: he has dropped two pant sizes and 50+ lbs. - so proud of him!). Again, I can't believe I'm posting these pictures, but I'm a honest person, and if I could post the before pics, then I can certainly post the after! Actually, Peter was taking these shots and saying, "you're going to post this on your blog? Really?" - yep, I really am. 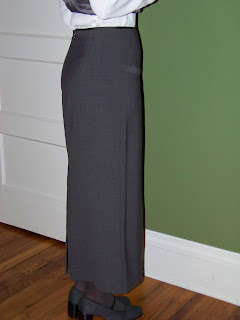 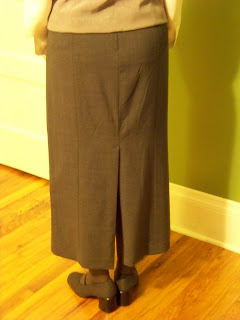 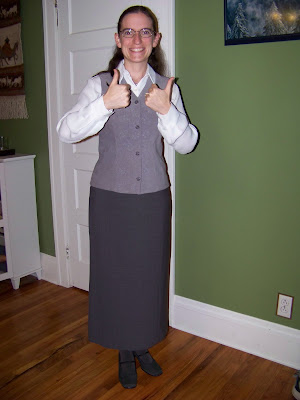 (ABOVE) Thumbs up - I can now wear it out in public!! I have not been in this skirt (and gone out) since the summer of 2003, so let me just tell you, it feels really good to be back in it - lots of hard work and learning self-control in the eating department, but it was and is so worth it!! By the way, do you like my shoes? I do.
I'm not paid to endorse the South Beach Diet, but let me tell you, with a lot self-discipline and some exercise (we walked on the treadmill 3-5 times a week for 20 minutes a day), it totally WORKS. And I can't say this enough, but I feel a thousand times better! Limit the carbs, drink more water, eat protein (hey, what do you know, I'm not hungry all the time now), include vegetables, cut down on sugars (we use Splenda)...it's a bunch of simple steps, but it is working for us and I highly recommend it! Of course, here's all that fine print about I'm not a doctor, talk to your doctor before starting on something like this, blah, blah, blah. We didn't talk to our doctor (unless you count my dad, who we got to go on the diet with us!), we just knew we had extra weight and we needed to do something about it instead of watching the scale climb (not so) slowly upward, sigh, and then go eat a bowl of ice cream while sitting on the couch.
One final note: I have to add that it makes it so much easier if you have (or find) someone to do it with you. Since Peter and I started this together, it didn't matter that I cleaned out the pantry and started over with new, healthy foods - we were both doing it. When one of us wanted to cheat, the other one was there to encourage (or kick in the pants) the cheater. Find an accountability partner or South Beach partner and start moving - I think you'll be happy you did. :-)
Email ThisBlogThis!Share to TwitterShare to FacebookShare to Pinterest
Labels: South Beach Diet