I think men get a bad rap. I hear them put down by wives and girlfriends, sisters and women in general. And while I know that some of them bring this on themselves, I want to be quick to point out that not all men are created equal. Some of us have been blessed to have a few good men in our lives, and we ought to be quick to call them out and sing their praises.

It started with my dad. He set the bar pretty high. My childhood memories usually involved my dad in some way. Being the "surprise" of the family, I got a lot of one-on-one time with both of my parents after the "first family" headed off to college and then started families of their own. Most evenings were spent in Dad's lap, watching some old Bob Hope movie, laughing while Andy tricked Barney, or enjoying a comedic hour of The Smothers Brothers. 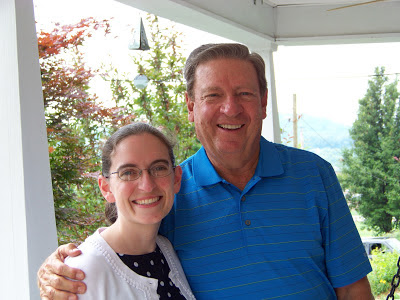 When I decided to spend a summer working construction overseas, Dad's protective side came out and he vetoed any location he deemed "unsafe" - which is why I ended up spending the summer on the Italian coast. He called himself "the anchor dragging the boat" when Peter and I were rushing headlong towards marriage and my 18th birthday was almost two years away. He didn't handle everything in the best way, but then... neither did we.

Looking back 15 years, I can appreciate the position that we put Dad in, and I am grateful that Dad wasn't willing to hand me over to just anyone. At 16, he was still my first line of defense against the world. While not perfect, he was a living, earthly example to me of the way that my Heavenly Father loves and cares, protects and defends, disciplines and commands respect. Dad's obedience to God, his headship of our family, made my faith and trust in a loving Heavenly Father so much easier. Dad's far from perfect, but he's a work in progress, and I'm grateful to have watched that for 31 years.

Peter gives me the same feelings of security and protection now, that my dad gave me as a child. When Peter approached me about pursuing a relationship that went beyond friendship, my arguments against it fell apart as I thought about what attracted me to him as a friend. Gentle and kind, strong and brave, a great sense of humor, a love of travel and culture, a desire to be obedient to the Lord, trustworthy, dependable, and he could fix anything! As high as my dad had set the bar, I had my own list that moved that bar up quite a few notches, and Peter lept right over it as if it were nothing. 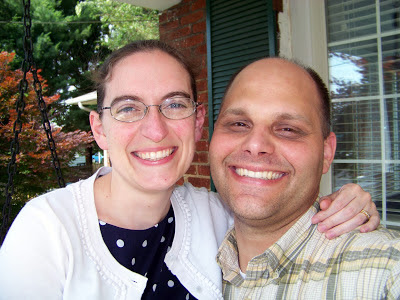 We celebrated 13 years of marriage this week. Not only has he gotten better with age, but he's pushed me to grow. When we were first married, I had a terrible temper. I was quick to blame it on heredity, he was quick to blame it on sin. I'm so grateful that he never pulls any punches and tells me the hard truth, pointing out things in me that I know are there, but would rather sweep under the rug than deal with. After 13 years, we rarely argue, and when my temper flares, he simply grabs me in a bear hug and reminds me that no matter what I say, he still loves me. It's really hard to stay mad at a man like that.

Peter is a good man. There aren't many like him in the world, but there are a few. If you have a good man or two in your life, tell them thank you today. Show them you appreciate their stand against the "norm" of men in society. Shout their praises from the rooftop - or at least from your Facebook status or blog. The world needs more good men, and those who stand up, who do the honorable thing, who strive to be better, to care for their families, to love and serve God - they need to know we are thankful for them.

I'm thankful for the many good men that I have been privileged to know, but today I am especially grateful for my father and my husband, two of the best men that I know.

Who are YOU thankful for today?
Go tell THEM!