He's Still Working On Me

Last week was rough. A couple of friends got stressed out Facebook messages, my husband got a lot of texts (because he's swamped at work and has been for a year), and I did a bit of sobbing onto my keyboard while I tried to get my act together.

After a washout on Wednesday, I woke up Thursday with the attitude that it was a new day with new opportunities to try again. How quickly I gave up on optimism. Within five minutes of sitting at the computer I felt my blood pressure start to rise, and I may have yelled at my laptop screen and pounded the desk.

The good news is that in the last 13 years, I have taken great strides towards getting my temper under control, and I've gotten quicker at recognizing the pricking of the Holy Spirit in the moments when I lose it. I recognize my own bad behavior and acknowledge that the best course of action is to not retaliate in the moment, but to calm down and say as little as possible rather than say something I will regret later. I am most definitely a work in progress. 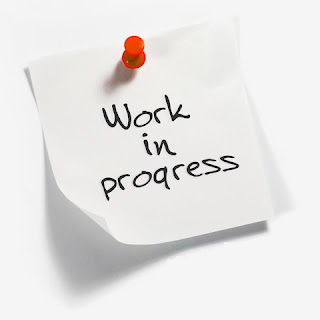 It's no coincidence that my control over my temper has improved in the last 13 years, because that's the same amount of time I've been married. Rather than accepting the excuses that I offered, "It's not my fault, you made me angry, it's hereditary, I can't help it," he helped me see that a natural tendency to flare up is no excuse for giving in to that feeling and acting on it. As my mother would say, well shoot fire! It killed me to admit it, but I knew he was right. And I'm so thankful that he called me on it, rather than letting me continue to get away with it.

But just because I've gotten better, doesn't mean that I never goof or get angry. It does mean that I handle it better in front of the outside world, and even (most of the time), in the privacy of our home, but last week, I did not. After I gave into my short-fused temper tantrum, I sent a text to the hubs, fully expecting him to justify my behavior. He responded by jumping right to the heart of the issue and calling me on the carpet for the pride that was behind my anger. Ouch. The truth hurts.

God gives all Believers the Holy Spirit to help guide them through life and convict and instruct them using Scripture. And while there are no words to express my gratitude for the Holy Spirit's faithfulness to use Scripture to convict me, I am also exceedingly thankful that God saw fit to give me a spouse who shares my faith, and doesn't shy away from telling me what I don't want to hear.


Therefore encourage one another and build each other up,
just as in fact you are doing.
{1 Thessalonians 5:11}
Email ThisBlogThis!Share to TwitterShare to FacebookShare to Pinterest
Labels: #WorkInProgress, Marriage, My Faith