My Battle with Jeans

I've written about fashion a few times on the blog, but I'm hardly a fashion icon (possibly the understatement of the year). However, each fall I get this little bug to share how my tastes have changed over time {Exhibit A, Exhibit B}, and this year is no exception.

When I was around seven years old, I informed my mother that I would {NEVER} wear jeans again. I blame this on the fact that the ones in my closet had butterflies stitched onto the back pockets and closed with a snap. I am not a fan of the snap. Or Velcro. It's a long story.

Anyway, I somehow managed to hold to that stance throughout grade school, junior high, high school, and right into college. At some point after graduation, I received a pair of hand-me-down, button-fly Levi's from my older sister that made me re-think my anti-jean policy. I still have them, though they don't come out of the closet much these days. Poor things.

After we came back to the States, I spent my unemployed days watching pirated copies of What Not To Wear on YouTube. Stacy and Clinton convinced me that there was a difference between acid-washed, mom-jeans and a pair of tailored, dark-wash trousers, but I was still not a fan of the "hug your curves" style that was sweeping the department stores. Here's my stance: I don't want to see my own pudgy spots, and I certainly don't want to see yours. Katharine Hepburn would not approve.

Over the years, I've tried on various styles and brands of jeans, but they all hugged where I didn't want them to hug, and some of them actually made me laugh out loud in the dressing room. To be clear, this is not a bitter diatribe against women who believe they are a 4 when they are a 24 (thank you People of Wal-Mart), but you can be stick thin and I will still argue that skin-tight pants are not the best choice.

While I think Kate Middleton is a class act when it comes to clothing, I recently saw a picture of her (post- Prince George), and her choice of attire made me cringe. The woman is a stick, and no one would guess that she had a baby just 3 months ago (kudos, Kate!), but these pants? Not good. Not because she doesn't have the figure for them, but let's leave something to the imagination.

Which brings me around to a chance encounter at my local Old Navy this summer. I had two hours to kill, and the closest store happened to be Old Navy. In general, I stay away from ON because about a month after I wash my purchase for the second time, I'm always sorry because I realize just how cheaply the garment was made. However, as I casually perused their merchandise, I noticed the "Sweetheart" style of slightly bootcut jeans in "New Rinse" and thought, "hmm... might not be too bad." 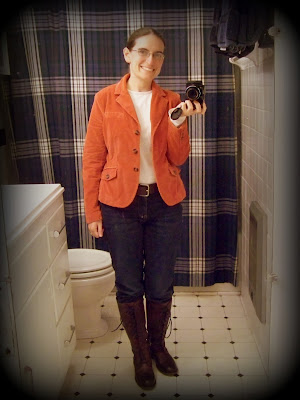 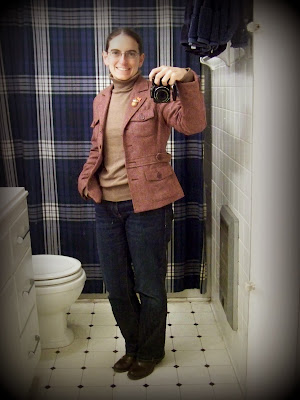 {My sister won't be happy if I don't point out that she found both blazers at a church clothing bazaar. Thanks, sis!}

How have your tastes changed over the years?
Do you have a stance on skin-tight vs. timeless?

Email ThisBlogThis!Share to TwitterShare to FacebookShare to Pinterest
Labels: A Style All My Own