How @PagePlus Helps Me #SaveMoney...

Okay, first things first. I have to answer the burning question that everyone has: is she an affiliate of Page Plus? Will she earn all kinds of rewards by linking to their website and sending us poor suckers there while she laughs all the way to the bank??

I don't earn a cent from Page Plus. I'm not on some VIP list in the Page Plus central office (wherever that may be). So, now that we have that out of the way, remove your skeptics glasses and prepare to hear the whole, honest truth about how happy I am that Verizon unknowingly pushed us into the path of savings...

When we returned to the States in 2008, we did what any good American would do - we signed ourselves up for a 2-year contract with the biggest company claiming the best coverage (at that time), Verizon. We were impressed by how "cheap" cell phone plans had gotten during our time away, and honestly, had Verizon shown some decent customer service, there's a possibility that we would still be shelling out money to them today... thank goodness their customer service stunk!

In early 2011, our contract was over and my husband wanted to upgrade to a new phone... but without signing a new contract. He found one he liked, purchased it off eBay, and then headed to our local Verizon store to have them port the number. No problem... if he paid an additional $30 a month for an unwanted data package since it was smart phone. It's important to note that his previous smart phone "fee" had been waived when he refused data, but that was apparently no longer an option.

While the idea of internet access via phone was appealing, we were willing to go without the data, relying on wi-fi hot spots to connect us should the need arise. We certainly weren't going to pay $30 extra a month for something we didn't want, nor did we miss. Leaving the Verizon store, we headed home, certain that the situation could be explained to a Verizon customer representative over the phone and they would have things fixed up in a jiffy. Boy, were we out of touch! 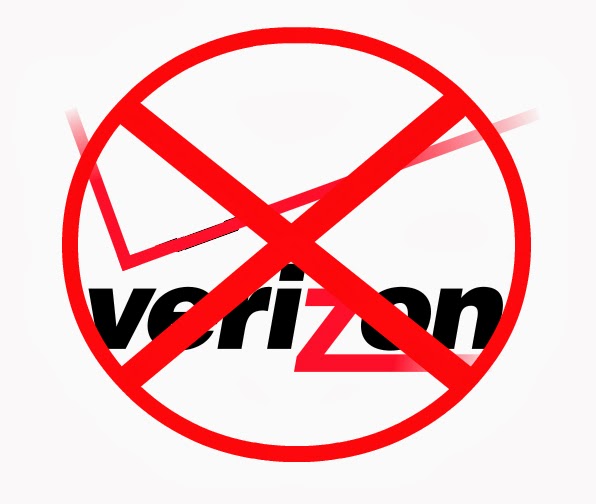 While living outside the U.S., one of the things we missed the most was the idea that the customer is always right. Apparently, four and a half years out of the States was enough time for Verizon to forget about that little motto. After an hour on the phone, going up three levels of service, being informed that we had "a personal problem" because we wanted to use a smart phone without data, and essentially being told we could shove it (buy the data plan or walk away), we walked away.

My husband, the most easy-going, flexible person I have ever met, was livid. Verizon pushed every button he had... and finally got a reaction. When he hung up, he swore up and down that we would never darken the door of Verizon, or any other contract-minded phone company, again.

A Dogpile search for "pre-paid phone plans" brought up a little company we had never heard of, but who was about to rock our world in a matter of minutes: Page Plus Cellular. Not only could we sign up for a monthly auto-renewal with no contract, it also allowed us to use the phones we already owned, and included texting (which our Verizon plan did not... without paying more), and DATA (a.k.a. "the holy grail").

No taxes, no fees, no hidden charges, AND it ran on the Verizon network. We got the same coverage, more features, and no headache for $60 less a month. [Insert Sounds of Angels Singing] It was too good to be true. While I sat by, my husband dialed the Page Plus number... where someone picked up after the first ring. He wasn't ready to start talking because he thought he was going to have to wade through a phone menu first, so when the woman said hello a second time, he jumped!

Within a few minutes, the Page Plus representative had confirmed that both of our phones would work with their system, and had ported the numbers, answering all of our skeptical questions along the way. For a flat fee of $29.95 a month (for the hub's phone), and a $10 for 120 days card for my emergency phone, we were in business. We were completely sold, eventually bumping my plan up when work required it, and bringing my parents over from Verizon to Page Plus Cellular.

I still recall the words that came out of my husband's mouth after he finished switching over to Page Plus... "Hey Verizon... can YOU hear ME now?" And while we know that they don't care about losing two small customers, they should care about the fact that those former customers are now evangelists for a different company.

In the years since we switched, several companies like Page Plus have popped onto the scene, and they are no longer the only option on the market if you decide you want to cut the strings with your contract. Personally, we've had an excellent experience with Page Plus, and have no qualms suggesting that you check them out first. However, no matter what company you look into, for frugal folks like us, the bottom line is really this...


If you're still tied to a cell phone contract, you're throwing money away every month.


If you're looking for ways to slash your budget, this is one painless way to help without losing anything in the process. Check out Page Plus today... tell them Peter and Carrie sent you. Not because we earn anything back, but because we're just not finished saying "thanks" for treating us like human beings and giving us options we could live with.