Maybe It's NOT Writer's Block 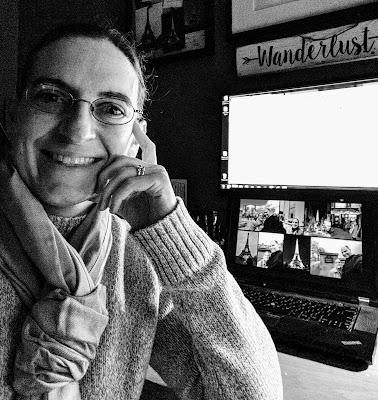 When I started this blog in 2009, I did so because I had a plethora of time on my hands. Newly returned to the United States after four years living in various locations around the globe, I was desperately trying to figure out how to fill my days. I'm sure the Hubs would have voted for clean clothes and a tidy kitchen - but those things are so overrated...

We were still using dial-up to access the internet, but as I slowly surfed around I came upon a couple of blogs that I began visiting on a daily basis. Although I had briefly attempted writing a blog while we were overseas, the internet was so sporadic and slow (making our U.S. dial-up option seem fast, which should tell you something), I gave up on it after just a few posts. Plus, I didn't know what to say. How does one make a regular day sound exciting and humorous?

"This morning we got picked up by the work carpool van and managed to avoid hitting the goat in the road. Even though I'm wearing 18 layers of clothing, I never seem to be able to get warm - I suppose that could have something to do with the giant metal hangar where I spend my days without heat. After work we had to cook dinner over our coal fireplace because the electricity went out AGAIN, which made our electric stove, microwave, and hot water pot completely useless. We bundled up and went to bed, hoping that the water wouldn't be frozen in the morning, even though the pipes are installed on the outside wall of the house rather than the inside."

The point is, on days like the one described above, we were usually just trying to make it through without snapping at each other and that really didn't have a lot of reader appeal.

But when we came home and I had a nice warm house and oodles of time to kill, I decided that I might as well join the blogging world again - and who knew? Maybe I would be discovered and become a big time blogger with book deals and lots of cash! Spoiler alert: neither of those things happened. But I kept writing anyway.

In fact, I wrote five posts a week, Monday through Friday, faithfully for about 4 or 5 years, until the job that I had by that point took up more of my time and, you know, actually paid me for writing. I kept the blog URL, I kept the Facebook page, but I wrote less and less often as life got busier. Plus, let's be honest, the blogging market became glutted with options for reading, and when you realize that you're NOT the next big thing and your audience consists primarily of people you know, it kind of kills the motivation for writing. At least, it did for me.

Plus, God started taking us on this crazy adoption journey and, for the first time ever, it felt too personal to write about. You want to know about how dirty my house is or how many dishes are in my sink or why I love books? Welcome in! I'll even show you my closet, and model outfits that no one else wants to wear (who was I kidding when I jumped on that craze?!), but to open up my inside life, to share about the battle that had been raging between choosing to obey God and choosing easy, that was not something I was willing do. And when you have this big, massive thing going on in your life that you know is going to completely change everything about you... but you can't write about it? Well, let's just say it killed the buzz for wanting to write about anything else.

After we finally made our announcement to the world back in January 2016, I started a new blog and began chronically our journey there. I shared ups and downs and it felt authentic and real - though I still had to be careful of the details that I shared because nothing is private on the internet, and we didn't want anything to jeopardize the adoption (well, that's not entirely true - right down to the moment when we were in country to pick up the kids and we thought the adoption might fall through, we were still holding on to this weak string of, "Maybe God really did just want to teach us to trust Him and now He's going to reward us and send us to Paris." Ugly but true fact... and a topic for another day, another blog, but off topic right now.)

However, even that blog slowly faded (despite a larger following than this blog ever had!) because once we were neck-deep in the bog of parent-life (especially when we were wading through the mire of not being sure that the adoption was even going to happen), I once again felt that we had reached the point where it was too personal to share. Close friends and family members knew what was going on, and I used Facebook to selectively share items for prayer, but the blog was too much. I had writer's block because there was too much to say, too much to share, not because I didn't have anything interesting to add to the world. I was overwhelmed with a wealth of information, but underwhelmed by a desire to write about it.

Last year I attempted a few blog posts, both here and on the adoption site, but we were still so far in over our heads and trying to cling to our 2017 Word of the Year (SURVIVE), that blogging was the last thing on my to do list each day. However, about half-way through the year the kids made some significant personal decisions that dramatically changed the dynamic of our household, and as God led us towards, through, and past the one year anniversary of the adoption, life began to feel more manageable. I started taking on work again this past summer, and the kids now know that when Mom says she has to go work in her bedroom, they need to find ways to occupy themselves - and they do!

During the Christmas holidays I started to consider the idea of resurrecting this old blog of mine, but with a more realistic view, like 1 or 2 posts a week, and offering space for others to guest post if they were so inclined. We're the second week into 2018 and I'm on my third post - so far so good!

However, I find myself coming up against a familiar block - how much is too much to share? Even the most mundane posts are giving me pause because our daily life no longer just affects the Hubs and me - it affects 5 other people, one of whom is in Middle School and has friends on Facebook (even though she isn't on Facebook) and knows when I post family photos or tell stories. While I'm all about a little embarrassment, I do want to be sensitive to what I share and write about because it's no long all my story to tell.

So here I am. Post number 3. I don't know what post #4 will contain. I don't know if I'll still be writing in June or if God will have set my sights on something else. But for now I'm here, trying to get back into my writing groove, open to whatever He wants me to share - the good and the bad, the sorrowful and the downright hilarious. Have laptop, will write.

To God Be The Glory.
Email ThisBlogThis!Share to TwitterShare to FacebookShare to Pinterest
Labels: #my2cents, #WorkInProgress, Adoption, The Online World