The Grass Won't Mow Itself

Working in front of a fireplace on Monday... working with the windows open on Thursday. This is spring in East Tennessee! 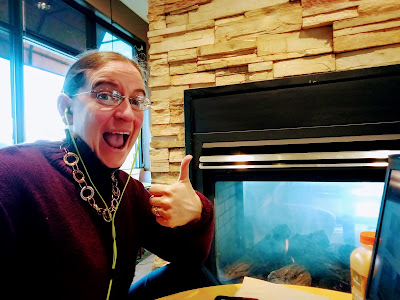 In other news, today at 3:30, Spring Break (Part Deux) began, with the kids home for the next 4 days as we celebrate Easter. It will be a different celebration this year as they are all Christians (which they weren't last year), and we have been reading through the Gospels so that they have a better idea of why we celebrate. In the words of one child when she realized what Jesus did for her, "Wow. That was really nice of Him!" Now there's an understatement, but it's an improvement on last year! And while the older four are beginning to get it, the youngest asked when we were going to do that "egg thing". She's 5... we'll get there.

My reading has slowed down a bit the last couple of weeks (thus the lack of WOMNS posts), but I'm currently reading an early readers version of The Lost Vintage that I won from a Goodreads giveaway. Every once in a while it pays to fill those forms out! Anyway, I read both of Ann's previous books, including Mastering the Art of French Eating (which I loved), and so far I'm really enjoying her foray into novels. I try to read a few pages every night, but honestly, most nights I find myself nodding off and wake up only when the book falls out of my hands and hits my head. Winner, winner, chicken dinner. I'm officially old now.

And speaking of old... over the last year, my pants have become increasingly tight, much to my dismay. As I recently told a friend, most women who complain about the weight they've put on have biological kids to point at and blame for it. And while I have 5 children, I can hardly point at them as the cause of my weight gain...unless I try to chalk it up to stress eating (which I really don't do). Sadly, this new phase of life appears to be tied to heading downhill to 40 and my family genes finally catching up to me, but I'm not going down (or rather - up) without a fight.

Which is why, last week, I informed the Hubs that he needed to drag the mower out of mothballs because I was going to kill two birds with one stone - save money by not paying someone else to mow our acre (as we have for the last few years), and get some much needed exercise in. On Sunday afternoon he showed up with a new self-propelled mower (as our old mower had finally given up the ghost), and I spent about 2 hours pushing it up and down our hill. I only got about 1/4 of the yard done. Why did I think this was a good idea?? At any rate, it's scheduled to rain tomorrow, so I guess that means that I need to change my clothes and hit it again while he makes dinner. That grass isn't going to mow itself... sadly.

Leave me a comment below and let me know what's new in your world! And for those who are celebrating - Happy Easter!

He is Risen!
Email ThisBlogThis!Share to TwitterShare to FacebookShare to Pinterest
Labels: Humor, Personal, work-from-home