I read 59 books in 2019. I really didn't know if I'd make my original goal of 52, so I was surprised and delighted when I surpassed it. Granted, several of them were children's chapter books or re-reads for my own pleasure, but it still counts for me. Reading is reading, and I'm amazed that even in all the chaos of being a full-time chauffeur, cook, nurse, tutor, and life counselor for five little people, a part-time, work-from-home editor and consultant, and squeezing in the occasional lunch date with the Hubs, I still managed to find time to read that much. It just goes to show that if you make something a priority, you learn how to say no to lesser things and yes to better things. 📚

Since 2019 proved it was possible, I've chosen the same goal (52 books) for 2020. But here we are, half-way through January, and I've gotten off to a rather bumpy start when it comes to sticking with completing a book a week. Life has been very busy, the Hubs has been working long hours and late nights, and by the time I crawl into bed and try to read anything, the book (or my phone, where I use my Kindle app) just ends up hitting my face within minutes of starting. I know this is just a season, so I continue to grab the moments I do have in car line or sitting at a sporting event, and try to make some headway, albeit slowly. 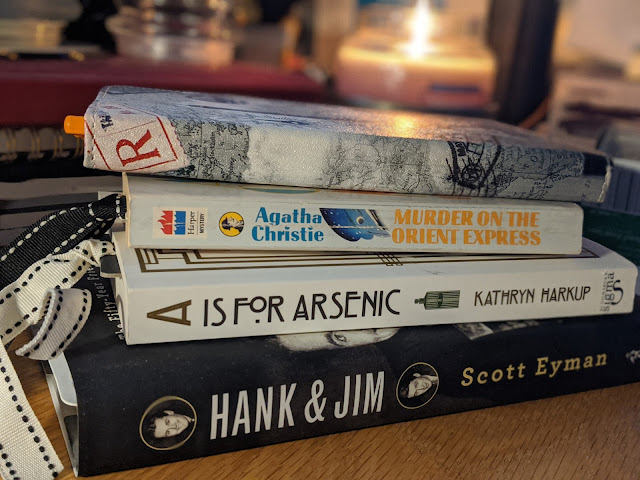 So while those are currently what's on my nightstand (WOMNS), I haven't finished any of them. My saving grace at the moment, and the only reason I'm still "on track" as far as Goodreads is concerned, is that everyday on our ride to and from school the kids and I are listening to Radio Theater's production of The Chronicles of Narnia, produced by Focus on the Family and recorded in London. We've completed The Magician's Nephew and The Lion the Witch and the Wardrobe so far, and are currently working our way through The Horse and His Boy.

In general, I am not a fan of audio books, but the kids have loved listening to Adventures in Odyssey over the last two years (as have I, reliving my childhood!), and when I saw that this was done by the same folks, I figured it might be worthwhile...and it has been! I cannot speak highly enough of this production. We received the CD set for Christmas from a family member, but you can also get the MP3 version from Amazon (for over twice the price, just FYI - it's cheaper to buy each MP3 audio book individually in this case). As soon as we get in the car each morning and afternoon, at least one of the kids immediately says, "Can we listen to Narnia?" That's music to my bookworm ears!

Side note: If you're on Goodreads, feel free to send me a friend request so that we can keep up with what we're both reading. I love seeing what others add to their shelves, and often find a future read because of it.


What's on YOUR nightstand?
Email ThisBlogThis!Share to TwitterShare to FacebookShare to Pinterest
Labels: #WOMNS, Bookworm