Update from "The Stack" (What's On My Nightstand)

This opening paragraph could also be titled, "Reading Update OR How Many Links Can I Fit in One Paragraph?" But as it happens, I'm plugging right along on my Goodreads goal for the year (as I type this I'm at 10 out of 65 books, but that may be higher by the time this publishes on Friday). If you missed the post I wrote about children's books I've read so far, you can find it here. In the meantime, I've finished two books on Kindle (reviewed here and here), and earlier this week I wrapped up the first paperback from my bedside stack, Boundaries with Teens. 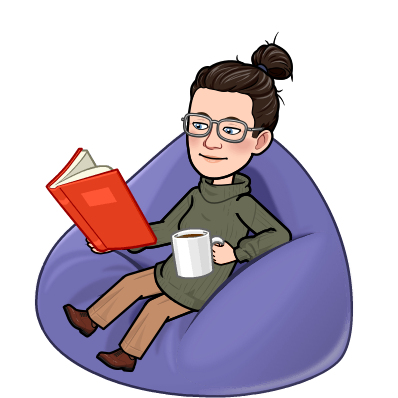 As a side note, I wanted to have someone design a really cute little watercolor of me, snuggled up with a book and a mug of something warm, to use with these Nightstand posts, but since that was going to cost an arm and a leg, and my blog makes no money for me, and the only person who clicks the like button on any of my posts is my husband...I didn't think it was worth losing a couple of appendages. So for the time being, you're stuck with Bitmoji me (and if you don't have Bitmoji, they make life—and text messages—a lot more fun, so you should check them out in the App store, it's free). But back to the book!

The book on the top of my stack when I took the picture earlier this month just happened to be Boundaries with Teens: When to Say Yes, How to Say No by John Townsend. Well, it didn't just "happen" to be on the top of the stack...it was there because I'd been reading it to try to figure out what was "normal" for my teenager and what I should be overreacting responding to, rationally. I was about halfway through the book before Christmas, when I found myself in conversation with a friend who was sharing some of the things she was going through with her teens. After listening for a little while, I paused the conversation, went to our bedroom, grabbed the book off my nightstand, came back out to where she was, and handed it to her. She needed it more than I did. I then had to take a break from that book (since I no longer had it), while I waited for another used copy to arrive, after Christmas.

I finally got around to finishing it this week, and my thoughts on it go something like this...

If nothing more, this book was an encouragement that I am not crazy, as I parent a teen whose mood changes from moment to moment. There were many times when I was nodding my head in agreement, and having "Yes! I'm not the only one," moments while reading, which, especially in the midst of hard moments, is sometimes all you need as a parent, especially when it's your first teen rodeo. But it also had some practical suggestions, that even though some of them sounded stupid (to me) on paper, when I found myself in situations where I could try applying them...it actually changed the tone of our conversations and made me look differently at the way she was reacting in the moment. And changing my viewpoint meant that I could let it—whatever it was at the moment—roll off a little bit easier.

Bottom line: It's a good book for first-time parents of a teenager to read, if for no other reason than to help you know what behavior isn't totally out of the norm, especially if you—like me—were a totally different type of teen than the one you find yourself raising. The one thing I would change would be for the author to update it. It was written in 2006, and a LOT has changed in the last 15 years, including the overwhelm of social media and the prevalence of smart phones. It would be really helpful to have a chapter on both of those, as "taking away computer time" is a bit archaic these days.
Thoughts? Opinions? Have you read it? And more importantly...
What's on YOUR nightstand these days?