It's that day of the week again - time for another book recommendation!  I haven't come across a lot of people who have heard of "Miss Read" books, which is why I decided it was high time that I recommend them on here! 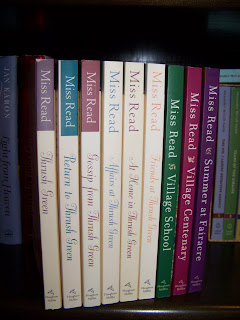 I stumbled across The Thrush Green

series a few years ago and what caught my attention the recommendation by Jan Karon - author of some of my other favorite books, "The Mitford Series

". Karon alleged that if her readers enjoyed a visit to Mitford, then we were going to love visiting the village of Thrush Green in the English countryside. Once I started the first book I couldn't put them down and had quickly finished the three I had purchased. I ran down to Books-A-Million (this was back before I was frequenting Amazon.com for cheap book deals!) and found six more, including three from her Fairacre

Miss Read is actually the pen name of Dora Jessie Saint who spent time as a school teacher and lives in England. She wrote both series of books from 1955 to 1996 and I found her writing style to be charming and her character development realistic. Although lacking the open religious themes of the Mitford series (Jan Karon), the books are mostly clean (a curse word here and there) and focus on the lives of the various village residents - specifically the middle-aged schoolmarms who enjoy their life, their profession, and their cups of tea.
After reading them and wondering why they jumped about so much (skipping several years at a time and landing you much later when various villagers have passed away, gotten married, or had children), I finally looked them up on Wikipedia and discovered it was because I was missing lots of books! I still haven't filled out my collection to see what goes on, but I plan to eventually (when I can find the books cheap enough!). If you enjoy the Mitford series I think you might like these. I won't go so far as to say that they are on par with Karon's Mitford, but they have a similar feel and they are very easy and quick to read. In fact, I would say they are almost the perfect summer reading material to take on vacation. They aren't for everyone (ex. I really enjoyed them, my sister did not and my mother thought they were okay), but if you're looking for light reading, then I would suggest checking these out at the library or looking for them used online.
Until next time...happy reading!

All links to books are part of the Amazon Associates program