I'm thankful I have a husband who doesn't seem surprised when I propose rearranging things. Last night he was dealing with computer problems (love him!) when I suggested we ditch the rug and move my desk from one side of the office to the other. While I was busy pushing furniture around the (small) room, he was still dealing with computer stuff and asking me from time to time if I needed help. After getting the desk to the other wall, I decided I didn't like it there, so sat in silence for a time trying to figure out how to make the room work. In the end, we moved all the computer stuff (desk, printer, misc. items that I don't know what they do, but I know they are important) to the end of the room and moved my desk back to the original wall (though different spot). Now that I have completely confused you, here are a couple of "Before" pictures: 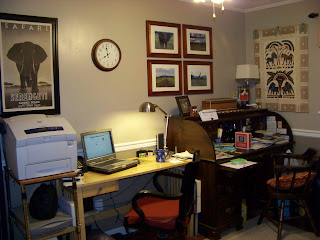 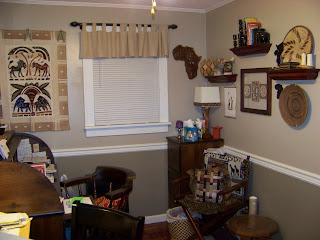 None of the pictures changed on the wall, so that should help you figure out where stuff was before vs. where it is now.

Now here are the "After" photos: 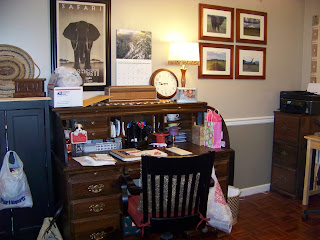 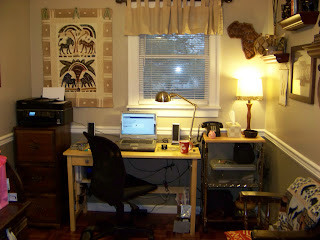 I'm still cleaning and tweaking the room, but that's the general idea. Sorry about the slighly blurry quality of the "After" pictures - I was not in a good picture-taking mood this morning. ;-) Overall I think it's better and I like being at my desk now that it's out in the middle of the room rather than stuck in the corner. Now comes the clean-out/organize phase (woo hoo!). The room already feels bigger just by taking out an extra chair and side table, but there's a lot more junk that can go.

I've got until Thursday afternoon to get the whole house cleaned up and de-piled (we're having company for dinner on Thursday), so I'd better get off of here and start working! :-)

Email ThisBlogThis!Share to TwitterShare to FacebookShare to Pinterest
Labels: #HouseToHome