OK, I wasn't sure what book to recommend today. I've got bookshelves full of books (in a room that we refer to as "the library"!), but I was coming up blank with book ideas. Then I remembered that was I re-reading one of my favorite Agatha Christie books AND I had just purchased (and watched) the DVD of the same name - so it must be the book I want to recommend! :-) I know, I know...Sherlock Holmes last week, Agatha Christie this week...what can I say? I'm a sucker for easy-read, well-written, old mystery novels! ;-) 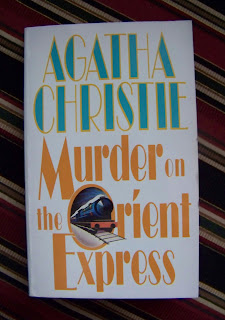 Today I'm recommending Murder on the Orient Express by Agatha Christie. I've got to start off by saying that if you have seen the movie (done in 1974) you need to read the book because it's better. Much better. In fact, this book is one of my top two Christie favorites (the other being And Then There Were None which was previously published as Ten Little Indians).

The story centers around the murder of one of the travelers on the Orient Express and Poirot - who happens to be one of the passengers - must figure out "whodunit" before the train reaches the next station. In the meantime, the train gets stuck in a snow drift and there is still a killer on board. After questioning passengers and obtaining passports and all kinds of half-truths and full-on lies, Hercule Poirot - as always - finds the truth. However, the truth is a bit more complicated than one might think and in the end...well, just read the book and you'll find out! :-)

GIFT IDEA: If you have a mystery lover in your life, consider giving them copies of the book and the movie. The movie is loaded with big-name actors and, though it doesn't stick strictly to the book, it is enjoyable to watch. Both are available on Amazon and if you click on my links below, I'll earn some money back on your purchase.