Last week I wrote THIS POST that listed five things that you might (or might not) know about me in an effort to be more real to you. I promised that I would give you the remaining five items today, and I will (and will try to keep them short!), but first I have to share this clip with you from "The King and I". The song has been running through my head since last weeks post. :-) It's one of my two favorite scenes (well, make that three) from the movie. And if you want to sing along, it's OK by me - it's a guarentee that I will be! ;-)

So without further ado, here are the remaining five items of last weeks "Top Ten" list...
Carrie's Top Ten Things You Might Not Know About Carrie (Part 2)
(#6) One of my favorite snacks was introduced to me by my husband. I love fried or baked yuca - a food that he grew up with in Peru. As we have traveled the world, we've discovered that it is also called "mandioca" in Mozambique, "cassava" in Tanzania, and "singkong" in Indonesia - but it's all the same thing. In the U.S. we've only been able to find the waxed variety (waxed for shipping), which is fine, but fresh whatever-you-chose-to-call-it root is delightful with a bit of salt. Mmm, Mmm Good!
(#7) I have a horrible, paralyzing fear of snakes. I'm a very rational woman, but when I am around a snake, Peter says he sees a side to me that he never knew existed. It's not a pretty sight and snake jokes don't go over well (J.F. - if you're reading this, a certain rubber snake in the bedroom comes to mind...). :-)
(#8) I don't mind getting my hands dirty with airplane (or car) maintenance. Whenever it was allowed overseas, I headed to the hangar with Peter (who has a college degree in aviation maintenance) and helped out when and where I could. My small hands get into some tight spots on airplanes! :-) I don't always know what I'm doing, but I'm pretty good at following directions. 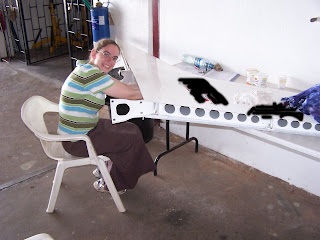 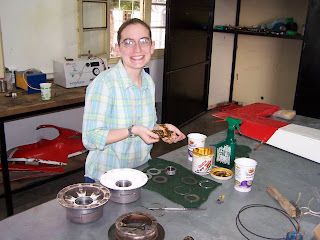 (#9) The Good, the Bad, and the Ugly: I love most musicals, my sense of humor is unique, I dislike drama and fakeness, I'm easily annoyed, I'm very opinionated, I can be outspoken, I've been know to be a bit too blunt, I think PMS is an excuse for bad behavior, and women can drive me nuts. [GASP!] If I'm supposed to be honest, that  pretty much sums me up. I don't understand being emotional about life - emotions are something you either give into and allow to rule your life (caboose driving the train), or they are something you recognize you have, learn to deal with (in a healthy way) and move on. Once I recognized that I got cranky at a certain time in a month, I learned to deal with it and didn't use it as an excuse to be nasty to Peter (or others around me). So there you have an example of me being annoyed, opinionated, outspoken, and blunt. :-)
(#10) If you're still reading after #9 then I guess we're OK! :-) I'll try to end it on a high note. I'm far from perfect, but I'm striving daily to become more like the image of my Heavenly Father. One of my favorite books of the Bible is the book of Proverbs. The whole book is full of wisdom, but I wanted to give a small sample of ones that stand out to me: Proverbs 11: 22 & 24-25; 12:1 & 4; 12:15 & 16; 19:14. I also love these verses scattered throughout Scripture: Isaiah 41:10, John 3:16-21;1 Corinthians 13:1-13; Colossians 3:12-17; 1 Peter 3: 15, and finally, 1 Thessalonians 4:11-12.
I hope you've gotten to know me a bit better through the last two weeks. Next week I'll be back to listing things like my Top Ten Favorite Musicals or something like that. In the meantime, write me - I'd love to know you better as well! Blessings!
Email ThisBlogThis!Share to TwitterShare to FacebookShare to Pinterest
Labels: Favorite Things, Film and Television, My Faith