I stopped our story last time at a pivotal point in our friendship - Peter was falling in love with me and I was oblivious. If you need to know what I'm talking about, check out Part 1 and Part 2. For the rest of you, here we go...

Shortly after Peter taught me about lawn mower engines, I went on a week-end trip to the JAARS/Wycliffe center in Waxhaw, NC with several Moody Aviation students. JAARS was doing one of their "JAARS Days" and since the guys knew I liked airplanes, they invited me to go down with them. I stayed with friends of my parents and the rest of the time I was hanging out with Peter...and the rest of the guys. On Saturday night Peter told me he was going to go ahead and drive back home instead of driving back on Sunday. He asked if I wanted to drive home with him or if I wanted to stick around and go back the next day with our other friends. I opted to go back on Sunday as planned and Peter, unbeknownst to me, drove home quite disappointed. He really wanted me to drive home with him so we could talk more, but I chose to stay. I ask you...how was I supposed to know he had feelings for me and I would offend him if I didn't go? ;-)

Several things happened on that Saturday evening and Sunday in Waxhaw that made various aspects of my life clearer and brought things into focus. I came home in a somber and meditative mood. While I was learning lessons down in Waxhaw, Peter spent Sunday afternoon sitting with my mom on our front porch spilling his guts to her. He told her how he was struggling with his feelings for me and he didn't know what to do next - or if he should even do anything at all considering my age. My mom was...thrilled! She had liked Peter from the first and thought he would make a great son-in-law. In fact, the feeling was mutual. During the snowstorm Peter freaked me out by making the comment, "Your mom would make a great mother-in-law!" Say WHAT?!?! Peter left shortly before I arrived home from NC and my mom was bursting to tell me everything Peter said. However, we had a family dinner that night and she had to wait until everyone had left and we were alone before she could spill the beans...

Peter liked me a lot and wanted permission to persue a relationship with me. [GASP] "Mom, I am not at all interested! He's a great friend, but I have no romantic feelings for him at all!" Mom asked if I could give her any reasons why I wouldn't like him...think...think...think...not really, other than that I wasn't physically attracted to him (sorry Honey!). She told me I should pray about it, but she understood if I didn't feel ready to start a relationship. As I was getting ready to go upstairs to bed I turned and told her (with a snippy attitude as I recall), "Well, you can tell him that if he wants to try to woo me he can. I don't think it will work, but he can try." I went on up to bed and the next morning at 6:52 AM, my mom flew to the phone to let Peter know he had a green light from me.

I should also mention that at this point my dad knew nothing about Peter's feelings. It's the part of the story that I wish I could change, but it is what it is and I'm thankful for the way their relationship turned out despite our poor handling of some things.

Approximately 40 minutes after my mom called Peter, my dad was hollaring up to me, "Carrie. Come here." What in the world? When I went downstairs, my dad said there was something I needed to see in the basement and I needed to explain it. [???] I followed him to the finished basement where he had been getting ready to leave for work when he saw a flower and note on a bench in the hallway. I had no idea what to say to him. I picked up the pink carnation and a small note which read, "As you wish. - Peter" In all honesty I don't remember what I said to Dad or when he left for work. I seem to recall him saying something to my mom about talking about this later. Mom looked at the note and asked me what it meant...I was still in shock, but I did remember my Princess Bride

"That day, she [Buttercup] was amazed to discover that when he [Westley] was saying "As you wish", what he meant was, "I love you." And even more amazing was the day she realized she truly loved him back." 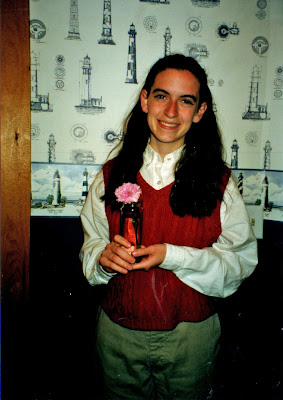 To Be Continued...
(Movie link part of the Amazon Associates Program)
Email ThisBlogThis!Share to TwitterShare to FacebookShare to Pinterest
Labels: Our Story