Disclaimer on Peter's behalf: In the end of Post 5 I shared my struggle with a lack of romantic feelings for Peter and my prayer. Well, as I was reading the post to Peter, he sat back in his chair and reminded me (with his best pained look) once again how much he dislikes that part of the story because it sounds like he was unlovable. It's not that he was unlovable, he was just, um, too early! :-) So I told him I would start this section by letting you know that it all worked out. ;-) 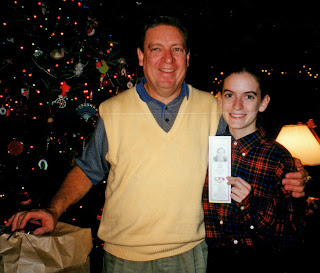 Here I am (with my dad) in December '97 holding my Teen Missions prayer card
I made a decision in December '97 (before the chaos started) that I wouldn't be spending the summer of '98 in the States. It was a tradition in my family that you would spend (at least) one summer working with Teen Missions International...whether you wanted to or not. ;-) All four of my older siblings had gone with TMI back in the 70's and early 80's. The last sister had a bad experience, so my folks weren't as fast to push me to go. We had a local camp where I had worked, but after three summers at the camp I was ready to do something different and I was really itching to go overseas - which would happen with TMI. When the life-changing stuff started to occur, I had already planned on on being gone for the summer to work on a missionary construction project in Italy. It ended up being a very hard, very yucky TMI experience, but it was a very good thing that I was gone. Why? Well, let's pick the story back up where I left off...
I wrote about my "scary" prayer in the last post. After the words were out of my mouth I knew there was no telling what the future was going to hold, but at least I was at peace that God would be in control. Over the next two weeks my feelings for Peter started to change. Instead of seeing him as a friend, I started to look at the various things I admired about him. I loved his smile. I loved that we would be the only two people laughing because the same thing struck us as funny. I thought he had great hair (he likes to call that the ol' bait and switch!). He was kind and helpful. He seemed to be very patient with me as we were going through all of this. He planned to serve the Lord overseas as a missionary and he was willing to teach me any technical thing I wanted to learn. It appeared that we had the same goals in life, the same humor, and the same spiritual beliefs...so what was I looking for that he didn't have? I couldn't come up with anything. The end result was that in the course of two weeks I fell in love with him and I fell hard! Now we had a problem. He loved me. My love was growing for him. And my dad wanted us to wait six years and remain friends. Hmmmm...

We were new to the whole "courtship" thing and we certainly didn't do everything right. But right or wrong, it's all part of the story, and for the record, my dad loves Peter now! ;-) After those two weeks, Peter could tell that my feelings towards him were different. We ended up spending quite a bit of time together after school - technically we weren't "alone" since my mom was around, but we were also not "backing off" like my dad had requested. (Peter's comment when I read this to him: "But the brakes were on and they were smoking!") On the positive side, these hours were spent talking and getting to know each other even better (our self-imposed "hands off" policy helped with that). ;-) However, we certainly weren't honoring my father or his request that we remain "just friends" and take it slowly. We have often said that had I been "of marrying age" (basically anything above 18!) we would have gotten hitched within 3-6 months, but since I was 16, that wasn't happening. Eventually we realized that if God was going to be at the center of our relationship, we needed to be more open and honest with my dad. Peter started coming by when Dad was around and joining in family meals. We met up at the Moody Aviation graduation the end of May and got our first "official" picture together... 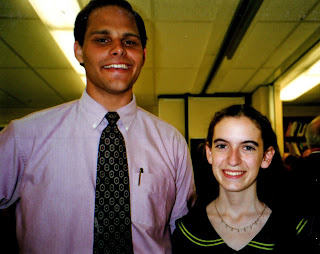 I was leaving to work with Teen Missions on June 19th. Peter really wanted to get permission from my dad to take me out on an official "date" before I left for the summer. Dad had been watching us together when Peter was at the house for a meal or over to visit. He could tell that something was changing - and honestly, he still wasn't happy about it. He thought that I was too young to be in a relationship this serious. Looking back on it, I don't blame him for his feelings about this because I can't imagine some child of mine pulling a stunt like this and living to write a blog series about it! ;-) This period of our relationship is one that I really don't like to remember or write about, so I'll just sum it up by saying that there was a continual tense undercurrent of anger and stress in the house. I know we could have all handled it better, but it didn't help that I was the first one of the three daughters (the other two were in their late-20's and mid-30's) to be in a relationship that was leading to marriage (although my 20-something sister was right behind me as Peter had introduced her to the man that eventually became our brother-in-law).
So happily skipping over a bunch of yuckiness, we arrive in June. Peter had been working on his relationship with my father and we had been "trying" to honor his request not to spend too much time together (and usually failing royally). Peter came over for dinner and told me he was going to ask my dad if we could go on a "date" before I left for TMI the next week. When I realized he was going to ask, I excused myself and ran upstairs "for something" - to pray hard while Peter asked Dad! Skipping a bunch of details, Dad shocked us by telling Peter that would be fine, but he had to get me home by 10:00. No problem. A date was set...June 17, 1998.
To be continued...again!
Email ThisBlogThis!Share to TwitterShare to FacebookShare to Pinterest
Labels: Our Story, Personal