Favorite Things: In My Home Edition

I've found some good buys in the last month, including an unique chair I have wanted for many years finally finding a place in our library (it was also an anniversary gift to each other). I've realized that as I have done these "favorite things" posts I end up desiring the items I list - which can easily lead to discontentment. That's not my goal, so this week I decided to highlight some of my favorite things (already in my house) and why they are my favorites (i.e. they are paid for, they were on sale, etc.).

Favorite Things Selection #1 comes from a shopping trip at the GAP a couple of weeks ago (actually, the same day as the infamous shoe purchase). I rarely "cruise" the mall, but as you already know if you read the shoe post, I was looking for ways to kill time while waiting to pick up Peter later on in the day. I, and my wallet, would have been better off if I had brought (or bought!) a book and sat in the parking lot to wait for him, but that didn't happen. I really intended to bring a book, but in the hurry of leaving I left it sitting on the coffee table. Without a book, my next option was to walk around local stores and watch my self-control bid me adiós. In the words of Claire Huxtable, I was weak and sad. However, I did get some good deals and since shopping is not the "norm" for me, it didn't ruin us financially (especially since I used cash - à la Dave Ramsey). :-) But I'm turning this into a downer post...so let me tell you why this purchase made me do the Happy Dance! 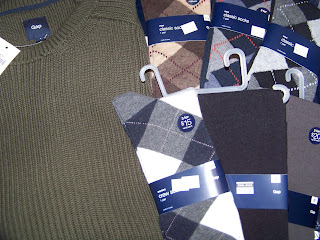 In the picture above you can see a sweater, three pairs of men's socks, a pair of women's socks and two pairs of tights in black and gray. The sweater was in the men's clearance section for $11.97 + an additional 25% off which brought it down to $8.98. The men's socks (purchased because Peter had just been lamenting the fact that he could no longer find nice argyle socks - oh yes you can! And on SALE!) had originally been 3/$15 and I got them on clearance (after the additional 25% off) 3/$6.72. The women's socks were normally $6.50 for one, but I got them after clearance and sale for $1.49. The tights were my best score of the day (I love to wear tights in the winter so these will be well used). They were originally 2/$20 and I walked out of the store (after clearance + 25% off) with 2/$2.96 which comes out to an 85.2% savings on the tights! Overall the original cost of everything (including tax - 9.5% here in TN) would have been $88.70, but I paid $22.06 for a total "savings" of 75.13%! Yes, this certainly is due cause for the Happy Dance! :-)
Favorite Things Selection #2 was a purchase made at the Bath and Body Works Semi-Annual Sale. I wasn't particularly impressed with the sale this year (though I went in later than normal), but there were a few things that caught my attention. I had checked out the sale on the same Saturday as the GAP trip and had walked away with four candles (75% off) and a receipt with a survey on the bottom that gave me $10/off my next purchase. I took the survey and went back later with my mom who wanted to do some gift shopping at the sale. I was going to let her use the coupon, but while waiting for her to finish shopping I noticed the employees setting out a few new things, including these glass candle holders... 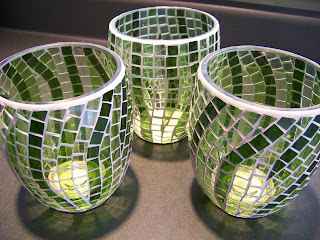 I snatched up three of them at $3.75/each and plan to use them on my very long kitchen counter - the colors are perfect. Original cost (+ tax) would have been $49.28. I got them for $12.32 - $10 coupon which made my grand total $2.32 or 95.29% savings! Yeah, I can handle that. :-)
And last but not least is my Favorite Things Selection #3: The Library Chair. Nine or ten years ago we were walking around Pottery Barn and came across an interesting item. It looked like a chair until you folded the back over the front and it became a step stool. It was love at first sight, but the price tag quickly brought that relationship to an end. However, we never forgot the chair and always talked about Peter trying to find a pattern to build one. Life kept us a little busy and the chair never came to be. Two days after our anniversary we were on our way home when we passed a hole in the wall junk shop. I had never stopped there even though we drive by it regularly, but on that day I glanced over and yelled to Peter to turn the car around. I thought I saw one of the step stool chairs sitting out front and I wanted to see how much it was. As we turned around we discussed how we were sure it would be overpriced and before Peter let me get out of the car we had to decide how much we were willing to pay for it. Once that was agreed upon I got out and prepared to be disappointed. I turned the green price tag over and braced myself for sticker shock. At first I gagged thinking the sticker said $225...and then my eyes stopped deceiving me and I read, "$25"...less than what we had agreed upon in the car. Peter got out of the car to look it over - it wasn't an antique and it wasn't from Pottery Barn, but it was all wood and Peter decided he could take it apart and rebuild it to make sure it would remain sturdy. He told me to ask for less and see what the owner would agree to. I walked into the store and asked if they would take $20 for it. No, but they could cover the tax. I practically threw it in the back of the car before they could change their mind! :-) I think it is a delightful reminder of our 10th wedding anniversary. 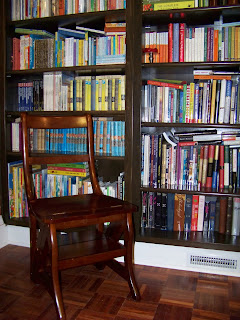 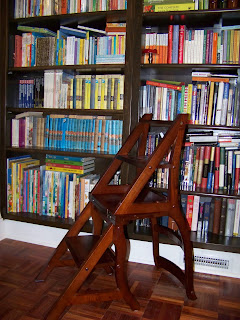 Mild-mannered chair or hard-working step ladder...
I've linked this post up to Frugal Friday over at Life as MOM - check out the post and links for more great money saving ideas.
Email ThisBlogThis!Share to TwitterShare to FacebookShare to Pinterest
Labels: Favorite Things