These beauties arrived at my door this afternoon. A "Happy 10th Anniversary" gift from Peter who was spending ten hours at work today (mandatory longer hours - but no complaints because that means overtime pay!). After ten years of marriage he knows the kinds of flowers I like - why send me roses when daisies are my favorite flower? :-) And he made sure they put in ten gerber daisies to represent our ten years of married life. Is he romantic or what? :-) 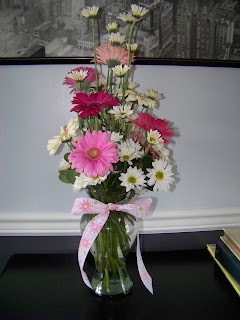 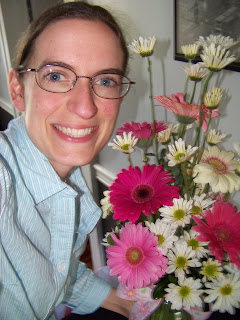 It was a low-key day. We ate BLTs at home before running out to a local marina to hear our neighbor and his son play in their band - and we even got an anniversary shout out as we were leaving. We came home and Peter continued studying for a test he is taking this Saturday. After our second anniversary (when we also had our second anniversary trip disaster) we decided to skip spending money on one day a year and just enjoy each and every day. It works for us...but I never say no to beautiful flowers! :-)