June 17th is a big day for us. Over a period of three years it was the day of our first date, the day that we became engaged, and the date that we picked for our wedding. This coming Thursday we will be celebrating our 10th wedding anniversary - those years have flown by! If you missed the first nine sections of our story, you can do a little catch up reading HERE. We had just become officially engaged in the conclusion of Part 9, my sister had just gotten married and Peter was preparing to move to Boston to look for work and an apartment. About a week and a half after our engagement, we packed up Peter's little '88 Mazda 323 with everything he owned (minus his aircraft mechanic's toolbox which I would be arranging to ship to Boston once he had a job). 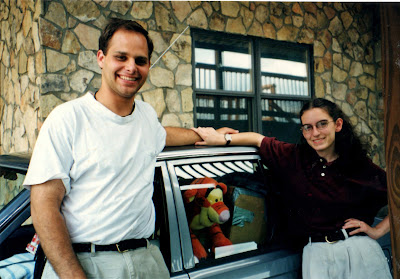 Here we are with Peter's fully packed car
When Peter left my summer was full of preparing for college, shopping and packing, spending time with family, and talking to Peter daily. Keep in mind that this was 1999 and cell phones back then didn't have the coverage packages that we enjoy a mere eleven years later. He had to get a job quickly or these $600+ phone bills were going to kill us! He had two temporary jobs (including working at my favorite store - Target!) before he finally landed an aviation mechanic position in Bedford, MA - about 35 minutes (during "good" traffic hours) from where I would be living in Wenham, MA. Once he had a job he started hunting for an apartment that would work for us after we were married. Easier said than done. After being #37 on a waiting list for a $1200 studio apartment and renting one "renovated" motel apartment for a few hours (which was all the time our friend's parents would let him keep it before they insisted he pick up his stuff and move back in with them), he finally realized that finding an affordable apartment in a good area was almost impossible. Since he had a free place to live - at least until I got there - he decided to focus on his job and we would worry about renting an apartment once I arrived and we could look together. In August I packed up my stuff and drove up to Boston with my folks and my sister. We couldn't get there fast enough and every time we stopped I waited impatiently until we were on the road again. 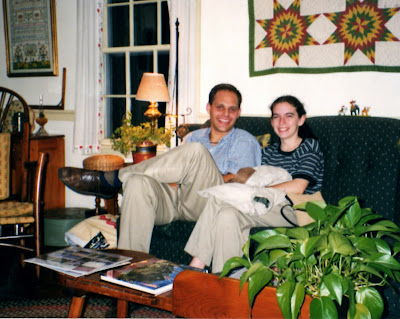 Finally reunited and oh so happy!
There's a lot that could be said about that year in Boston. Positives would be that we grew a lot as a couple, we learned to work through our disagreements even when it meant late nights, I met some great people at college, we had lots of new and fun experiences, we loved living near the city where there was so much to do, and we fell in love with the New England coast. Boston is still our favorite city and we love going back to visit as often as we can. However, it wasn't all happiness, sunshine, and light. A few of the downsides were that it was a very expensive place to live, the college that I had had my heart set on attending since my brother went to school there 16 years earlier failed to meet my expectations, and we were unable to find an apartment to live in once we were married. So although we are still thankful for that year together (which we call our first year of marriage without the "fun"), we decided that once I completed my freshman year, we would move back to Tennessee for me to finish college before we headed overseas. 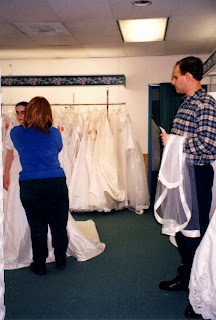 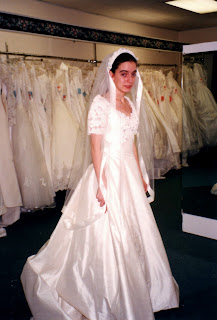 Yes, that's Peter standing there with me! And no, I don't feel ill, why do you ask?
Over my Christmas break from school I finally pulled that wedding dress out of the closet (where it had been sitting for a year and a half!) and took it in to get it altered. As you'll be able to tell from the pictures, we did everything a little differently - yes, that is Peter standing there holding my veil. Well, who would I want to go with besides my best friend? :-) I didn't realize that I was fighting the flu at the time, nor that I had lost about 4.5 lbs. from being sick. When I got home from getting the dress altered I collapsed on the sofa with a 103-degree fever. Nice. And six months later on our wedding day when I tried to zip up the dress I realized I was back at my normal weight. Oops! Suck it in, ditch the bustier (the dress was thick enough), and don't breathe. :-)
After my finals in mid-May, we packed up a large U-Haul and with a car trailer in tow we started driving to Tennessee. A wee bit different than when Peter moved up to Boston hauling everything he owned in his small car! However, I'll give you a hint as to what was inside the truck...but shhhh...don't tell U-Haul! :-) 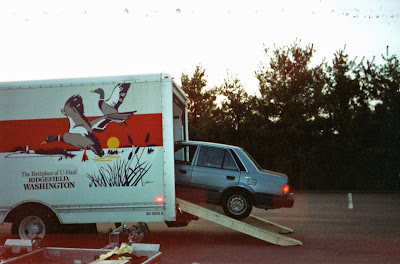 There's Peter's little Mazda 323 stuck half-way in and half-way out of the moving truck. We got some come-along ratchets and ratcheted that thing all the way in the truck from that point. Good times! And here we are (below) at my parents house with our U-Haul and the car we acquired in Boston. That was a miserable trip as it was stinking HOT, it rained the whole way down, and the A/C in the truck didn't work. I think we got $40 back for our troubles. 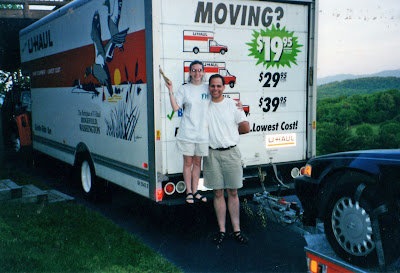 Once we were back in Tennessee we had about a month before our wedding. There was a lot to be done - like baking our own wedding cakes (no, that's supposed to be plural!). We got this brilliant idea that we could save a lot of money if we used box cake mixes and baked our own wedding cakes. My sister had a friend who gave us the recipe for butter-cream icing and for about a week you could find us in the kitchen baking cake after cake. Each layer was a different flavor - confetti, yellow, chocolate, strawberry, and lemon. After the layers were baked, we would slice the tops off and freeze the layer. On the morning of our wedding we were recruiting all our friends and family to assemble wedding cakes on the ping-pong table in my parent's basement. What's that? Yes, we were nuts and yes, of course there are photos of the process! :-) 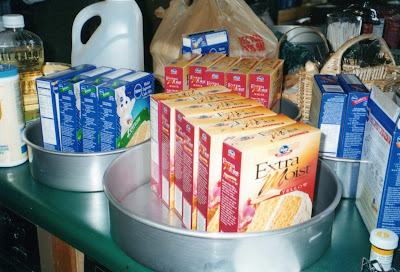 Cake mixes and cake pans all ready to go... 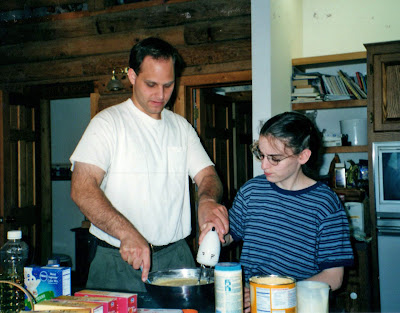 I have absolutely no idea why it looks like Peter is trying to get me to let go of the mixer... 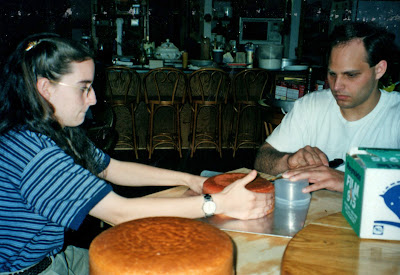 Cutting the tops off of each layer (later we would put icing between the two thin layers and then slap another layer on top and then ice a thick layer of cake) - we ate what we cut off. :-) 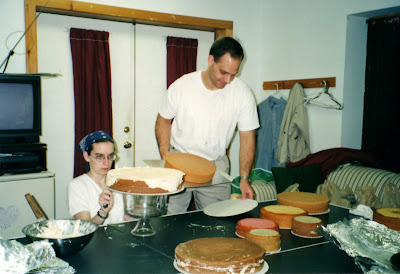 This was the morning of our wedding day - madly icing cake layers (and obviously we didn't care about Peter seeing me before the wedding - there was too much to do!) 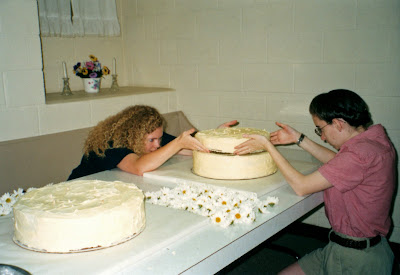 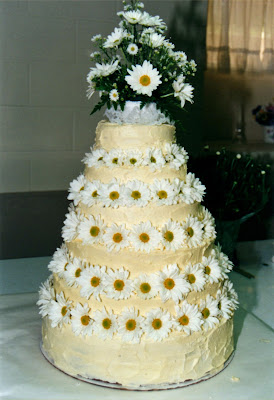 One of two finished cakes - they weren't perfect, but everyone loved them, they tasted good, and we did save money, even if we lost our sanity in the process! Actually I can only assume they tasted good based on what people told me - we were so sick of cake (we had eaten all the parts we cut off before they were iced) we didn't even try the finished product!
So with the cakes assembled, our friends and family gathered around us, the photos taken, guests arriving, and an hour left to kill before the service started, there was only one thing to do...eat Chick-fil-A for lunch of course! 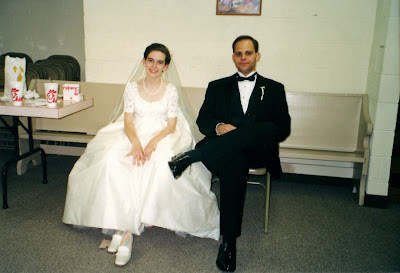 I planned on this being the final installment, but if you come back tomorrow I'll post some pictures of the actual ceremony and reception, and tell you where we went on our honeymoon. :-) If you don't want to come back for the pictures, then let me say thanks for reading along as we have reviewed how God set our story into motion and how He led us up to the point of marriage. Without Him our story would be very different. I am forever grateful for His leading in my life that caused me to pray that "scary prayer" and open myself up to falling in love with Peter. I could not have found someone more perfect for me, and I know that is no accident. So thanks for your patience while I retold our story and for your kind comments along the way. Hope to "see" you back tomorrow for the final wedding saga and then again on Thursday when I've got something quite special planned that will show you what the last ten years have been like for us. :-)
Email ThisBlogThis!Share to TwitterShare to FacebookShare to Pinterest
Labels: Our Story, Personal