It's June 1st and I have a little less than three weeks to wrap this story up, so I'd better get a move on! You might recall that in the last post I had just arrived home from spending the summer in Italy and we were not communicating very well (huge understatement!). When we headed home from the airport, Peter and I were pretty quiet and my mom could tell that there was something wrong. I handed out gifts and went upstairs to find one of my own - a huge stuffed St. Bernard from Peter. 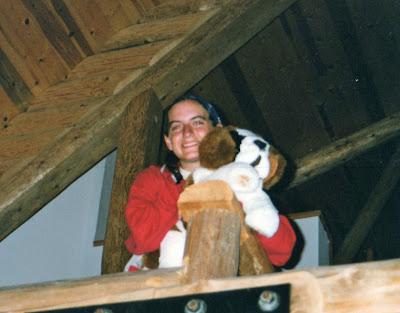 In all honesty, my mindset at the time was, "What a huge waste of money. I don't need this. What was he thinking?" and that's pretty much what came across to Peter. As he headed out the door he asked what time he should come over the next day and I basically told him "don't call me, I'll call you" - but not in so many words. He was hurt, angry, surprised, and confused. I was tired, grumpy, unhappy that none of my clothes fit (due to the 17 lb. weight gain) and the only thing I cared about at that moment was crawling into bed. Over the next two days I had a total meltdown...which eventually led me to informing my family and Peter that I needed some time alone and I would be in my bedroom until further notice. Do Not Disturb. The only person who understood was my oldest sister who had been through culture shock and knew that given some time, I would straighten myself out and be fine. I think the rest of my family (and Peter!) just thought I was nuts. :-) I spent one whole day in my room, listening to music, reading my Bible, unpacking, and ignoring that there was a world or issues that I had to deal with outside of my room. That evening I came down for dinner in a clear frame of mind and basically back to my old self. Unfortunately, the damage had been done as far as Peter was concerned.

Peter came over a couple of days later to hang out with us and after about an hour, he informed me he had a lot to think about and needed to leave...he would be back. Excuse me? That was not how these things were supposed to be handled. You didn't just leave to avoid the issues, you talked about them. As I watched him drive away I wondered if he would come back. Maybe we took it too fast. Maybe I scared him off. Maybe I was too young. But shoot fire...I loved him deeply and it would hurt a lot if it didn't work out at this point (especially since I already had my wedding dress - gulp!). About an hour or so later, Peter returned and I went outside to meet him. After asking where he went, I informed him that if he ever did that again he didn't need to bother coming back. You can imagine that he was a bit shocked by that statement. I told him I knew I had hurt him, and I was deeply sorry for that, but I couldn't go back in time and fix it. However, nothing was going to improve if we shut down and kept our feelings inside - we had to talk about them and get them out in the open and then get over them! I still loved him and I still wanted to marry him - did he feel the same way? He did. (Whew!) We talked and cried and took a huge step forward in our relationship. We had to deal with this one more time three months later (when we discussed holding onto hurt feelings and not talking about it - unacceptable), but that was the first and last time that he ever got in a car and drove away from the issue. :-) We went on to have a very nice day washing our dogs and spending time with my sister and her almost-fiance. 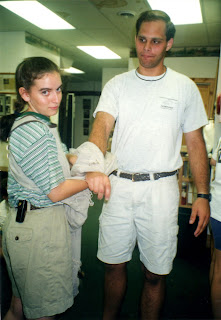 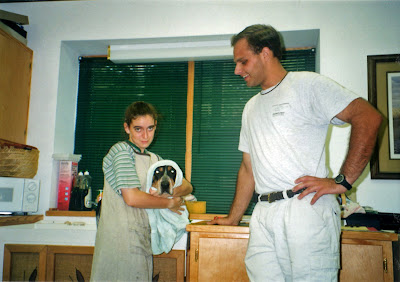 Yes, these pictures were taken on the day it all happened - after the verbal hand slap. :-)
One of the ideas that we had been throwing around since we first started talking about marriage (in May '98) was if I should try to complete my final two years of high school in one year. At first I was very opposed to the idea - I wanted to have the full experience of high school and college. After about a month of falling in love with Peter, I ditched that idea and decided I wanted to be married more than I wanted any experiences. :-) I still wasn't sure if I would be able to handle all the work in one year though, so when I left for the summer with Teen Missions, I was still undecided. Peter encouraged me (strongly) to think about it during the summer and by August, I had decided I was going to go for it. Because I was home-schooled, it wasn't a big deal to double up on classwork. Another deciding factor was that I had taken the ACT and SAT and had already applied and been accepted to the college of my choice during my Sophomore year of high school. With a college acceptance letter in one hand and the prospect of marriage after college graduation in the other, I decided I wanted to take the step to make marriage happen in five years instead of six. Peter was thrilled and did what he could to help my studies (all while completing his final year of college). I had one friend tutoring me through my remaining math classes (Thanks Sam!) while Peter took on my science tutoring (see photos). 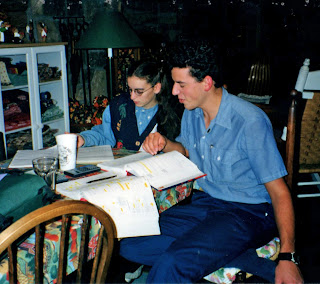 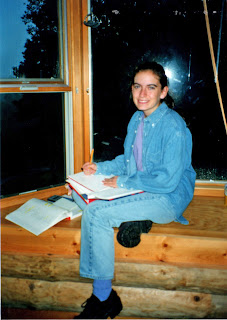 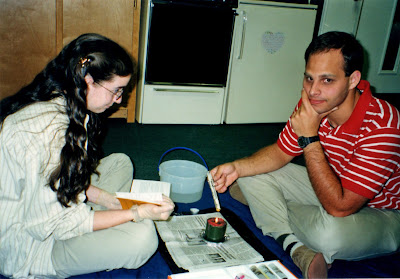 In November we discussed our self-imposed "no kissing" policy and decided that the only reason we were hanging onto that was because of pride. Kissy-kissy! The first kiss was a flop, but we made up for that later! ;-) Peter was the first man I had ever kissed and Peter had only been kissed twice before by a girl, so the whole thing was a big deal for both of us. Along the same lines, saying "I love you" was also an important event - one that was not taken lightly. Peter had decided long ago that he would only tell a woman he loved her if he was ready and willing to follow it up with a marriage proposal. Although I didn't get a proposal right after I heard "I love you", I knew he was ready to marry me - talk about feeling special! On a sidenote: If you're unmarried, don't lightly give away your kisses or your "I love yous" - it meant the world to me to know that Peter hadn't given away his lips or his love to a string of girls before me. If he didn't do it before he met me, I had a lot of trust in him that he wouldn't do it after we were married. In today's world, that's a rare thing.
By the end of '98, my dad had completely adjusted to the idea of Peter courting me. In fact, he was so okay with our relationship that he made a major change to our timeline - we no longer had to wait until I was through with college to get married! His new conditions were that I complete high school (he saw how hard I had been working on that), be at least 18 and finish one year of college before we tied the knot. The final stipulation was that post-marriage I had to finish college - to which both Peter and I readily agreed. As you can imagine, going from four and a half years until marriage to one and a half was beyond exciting for both of us! I had always wanted to get married in June, so as soon as we got the all-clear from my dad, we grabbed a calendar and selected a date for our wedding...June 17, 2000. 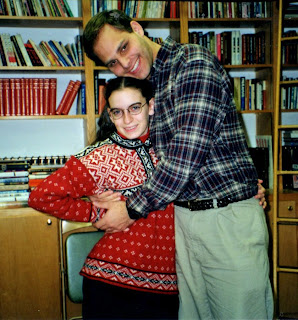 To Be Continued...at least one more time! :-)
Email ThisBlogThis!Share to TwitterShare to FacebookShare to Pinterest
Labels: Our Story, Personal