Patriotism is defined as "love for or devotion to one's country". I'm very patriotic. I'm passionate about politics and freedom and preserving our rights - rather obvious after the post I wrote on Friday. I'm very proud to be an American (most of the time) and am thankful that I was born in the United States. Each and every time we landed back on U.S. soil after our world treks, I was ready to kiss the ground and thank each and every police officer, fireman, and medical worker I saw. The words, "God Bless America" came easily to my lips upon our return to our homeland. We have an American flag on our front porch and the living room is bedecked in red, white, and blue in honor of America's Independence celebration. 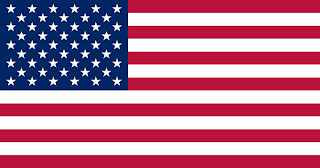 Image from Wikipedia
However...

On Sunday I experienced something that greatly bothered me - an excessive display of American nationalism in our church service. I love our church and I feel blessed to be a part of such a great body of Believers, but "patriotism/nationalism" took over the whole service. It took the place of Bible study and even of God. Watching children dance while waving flags and hearing that America is the "greatest country in the world" caused me to cringe repeatedly while glancing down the pew at my new Ecuadorian sister-in-law. An unwelcome parallel came to mind as I watched the children celebrate the country in the same way they often express worship to God, leading to possible confusion for the kids. The Nazi party and Communists leaders worked with the youth of the nations in a very similar way - leading them to pledge party loyalty with the express purpose of excluding God. Obviously no one had that in mind when they planned our church service, and I'm not saying someone had a sinister motive to make nationalists out of the children - but it's a slippery slope.

Nationalism is defined by Webster as "loyalty and devotion to a nation; especially : a sense of national consciousness exalting one nation above all others and placing primary emphasis on promotion of its culture and interests as opposed to those of other nations or supranational groups OR a nationalist movement or government." But as a Christian, although I am patriotic and loyal to my country, my allegiance - first and foremost - is to my God and His Eternal Kingdom. Philippians 3:18-4:1 reminds Christians that this world is not our final home.


For, as I have often told you before and now say again even with tears, many live as enemies of the cross of Christ. Their destiny is destruction, their god is their stomach, and their glory is in their shame. Their mind is on earthly things. But our citizenship is in heaven. And we eagerly await a Savior from there, the Lord Jesus Christ, who, by the power that enables him to bring everything under his control, will transform our lowly bodies so that they will be like his glorious body. Therefore, my brothers, you whom I love and long for, my joy and crown, that is how you should stand firm in the Lord, dear friends!
So while I have no problem with thanking God for the freedoms we enjoy in the U.S.A., and even taking a stand when we feel our country is headed in the wrong direction, may we never forget that we don't have a monopoly on God. He loves the whole world - red and yellow, black and white - all are precious in His sight. As much as I love America and I was (and am) thankful to be back, I also appreciated the diversity and culture from each country we had the opportunity to experience. I'm thankful He created us all in His image and yet still unique. Make no mistake, I'm exceedly grateful for my freedom as an American (and appreciate our Armed Forces), but I'm more thankful for my Freedom in Christ.

Stepping down from my soapbox now. :-)
Email ThisBlogThis!Share to TwitterShare to FacebookShare to Pinterest
Labels: History, Holidays, My Faith, Personal