Little Bits of Me

Editor's Note: I apologize for the whole PhotoBucket-not-showing-my-pictures thing. I find it annoying, but since Google/Blogger/Picasa won't give me any more free space for photos, I'm stuck using something else. Which happenes to be PhotoBucket. Which happens to not be working. Which most certainly annoys me. {sigh} At any rate, if you see this AND you see a picture, then YAY because they got it working again.

Ready for another round of strange and interesting facts about me? Good. Because I'm in a random writing mood and I'll take what I can get these days. Ready or not, here are a few more oddities about me. Got anything you'd like to share??

If you want to get on my good side or if you're wondering what kind of dessert to bring for my 30th birthday party this year, you can't go wrong with a lemon pie (or even just a slice of it) from Chick-fil-A. In fact, that was my birthday "cake" of choice three years ago and clearly shows that you should reconsider getting between me and my lemon yumminess. 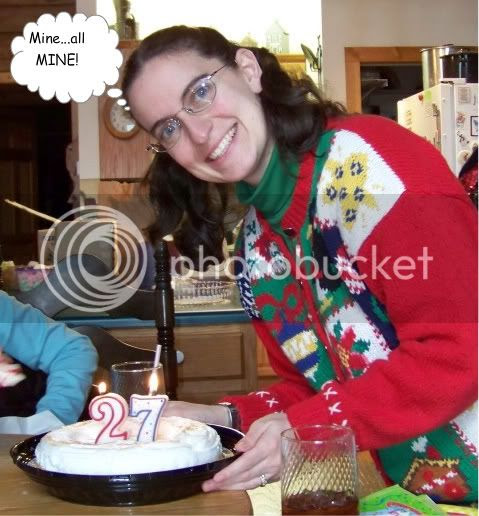 And while we're on the topic of food, let's just discuss Reece's Peanut Butter Cups, shall we? There is no substitute. You can say that the Sam's Choice cups taste the same - but let's be honest. They don't. The nice thing in this house is that if I ever give in and buy a Peanut Butter cup, they are safe as can be because Peter hates them. Always pick a candy that your spouse doesn't like - that way you're never faced with a fight about who ate the last one. There's some marriage advice for ya that I'm pretty sure you won't hear in your more traditional pre-marital counseling. It's on the house and you're welcome.
Which leads me right into another random bit for you - we'll have been married for 11 years this June and have never spent one night apart. We didn't start out with that as a goal or plan, but that's just how it has happened and we think it's pretty cool.
I have never seen "The Godfather" movies, but I've been known to quote a line from them thanks to watching You've Got Mail

a few too many times - "Leave the gun. Take the cannoli."
And to go from one movie to another...in my humble opinion, one of the best musical scenes ever is Tevye stomping around a barn singing, "If I Were A Rich Man" from Fiddler on the Roof

. If this clip that I'm sharing doesn't make you want to watch the film, nothing will. What a classic!
And there you have it - some more randomness from the recesses of my mind - it is time for spring cleaning afterall! {wink} Until next time...