Last week I wrote a short post with some random facts about me. Everyone who commented had something to say about one of the two marriage facts I shared: not missing a night and candy (see what I'm talking about HERE). At any rate, it got me to thinking about marriage and things we've learned and things that have stayed the same since we first met and I thought I'd hit some highlights. If you're already married - feel free to read, scoff, laugh, disagree, or possibly have a light bulb moment. If you're not married, you should get out a notebook and take notes because, of course, I have all the answers. Kidding, kidding (sort of)...

Lesson 1: If you feel like you have to look perfect before he sees you, he's not the one. If you can show up at the door with your hair in curlers and tell him that you're seriously running late and you both find it funny, or if he surprises you while you're wearing sweats over your flannel pj's and neither of you bat an eye...you've probably found Mr. Right. There's a saying about women you might have heard, "If the barn needs painting, paint it." Marry the guy who doesn't care if the barn is falling down, let alone if it's painted or not.

Lesson 2: I've heard it said that you can't be fully comfortable with another person until several years have passed. I totally disagree. We were as comfortable together as your favorite pair of slippers, which is why we decided to get married. You know that guy that you would never think of marrying because he doesn't look like that "ideal" you've got in your head? The one you'll go bowling with and spit lemonade all over when he tells a funny joke and talk to for hours at a time because he doesn't give you that butterfly-in-your-stomach feeling? Marry him.

Lesson 3: Buy (or register for) a duel-control heated mattress pad and all those nights when you're freezing and he's burning up would be a thing of the past. I can't even count the number of times this conversation has gone on in our house: "Honey, turn the bed on, I'm freezing." "How can you be cold? It's 70 degrees in here?" Duel-control heated mattress pads: wedding gift of the future. I'm sure George and Jane Jetson had one.

Lesson 4: Discuss having kids before you get married and be realistic - babies mean work, lack of sleep, poop, drool, and mountains of laundry. People with kids (a.k.a. parents) would add that they are a joy and a blessing and they wouldn't trade them for the world - we'll take their word for it. We agreed to wait at least 10 years (now going on 11) and we still don't know if we want kids - but at least we're on the same page. That's the main point - whether you want kids or not, make sure both you and your spouse are in agreement.

Lesson 5: You're going to be wrong 50% of the time - deal with it. It is not humanly possible to be right 100% of the time despite what you might think, unless you chose to live by yourself forever and talk to no one. If you figure this out, it's going to make your life so much easier. I still remember when it finally clicked for me and I thought: "Really? Is it worth arguing about when he told me to [insert anything small and unimportant here]...or can I just let it go and agree that I don't remember or it doesn't matter?" When one of us started letting things go, the other one did too. It's weird how that works.

Lesson 6: You don't understand why he feels compelled to save stuff, and he doesn't understand why you need to buy more shoes. Being different can be a good thing. Because he pointed out my shoe fetish and imposed the one-in, one-out rule, I've actually gotten pickier about the shoes I buy and it has saved us money. Because I was tired of dead appliances piling up, he started removing the components he wanted to save and throwing the rest away. Since he actually uses the stuff, I'm cool with it. Moral of the Story: Listen to your spouse without getting defensive when they point out stuff - you might actually learn something and make a change for the better.

Lesson 7: Seven's the number of perfection, so this will be my last point. And it's important. {ah hem} Are you ready? Bodily functions happen...from both of you. Bath and Body Works has two big sales a year, so stock up on "stink good stuff" and use it when necessary. And learn to laugh...at yourself too. It's not like either of you ate something that later smells like it died because you wanted to get back at your spouse's nostrils. 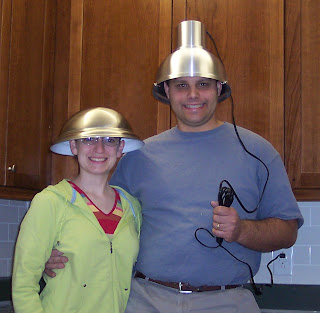 Wouldn't you trust marriage advice from these people??
Email ThisBlogThis!Share to TwitterShare to FacebookShare to Pinterest
Labels: Marriage, Personal