Last month I wrote a post about turning 30 and all the things that I had been able to mark off my list - some of which I didn't even know were on the list until I did them! We're another month closer to the big B-day and this time I'd like to talk about some people who have influenced me over the last 30 years and who have had a part in shaping who I am today.

When it comes down to it, almost everyone I have met or worked, lived, or worshiped with have, in some way, impacted me and helped develop my character. Sometimes it was through negative situations and hardships (certainly times of character growing for me), and others are a part of this list because of the positive interaction that I have had with them.

It has been a good reminder for me that I also have the opportunity to impact every person with whom I have contact - it could be good, it could be bad. I had a couple of days late last month that cause me to cringe when I think about how I came across or what I said. Thankfully, as a Christian, I have the opportunity to ask forgiveness and pray for help in changing to become more like Christ and less like stinky ol' me.

It seems that the older I get, the more I realize that I know nothing and that there is always room for improvement. Does that mean that at almost-30 I'm finally starting to grow up? I guess time will tell. In the meantime, let me get to some of the people that have influenced me over the course of my lifetime. Some I have pictures of, some I don't.

1. It goes without saying that my parents and siblings are far and away some of the biggest influences on my life throughout my life to this point. Daddy and Mama loved me unconditionally, disciplined me consistently, taught me about Jesus and encouraged me to go wherever the Lord led me. I'm forever grateful for their imprint on my life. 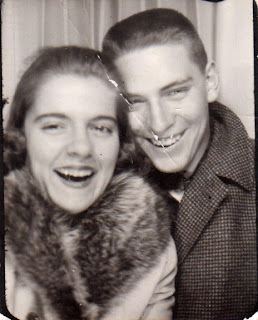 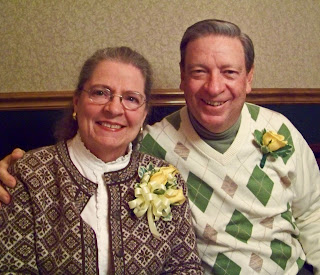 2. My four siblings taught me about having thick skin and how to laugh at myself. They gave me a love of Louis Armstrong, children's literature and large personal libraries, history, travel, and learning. They have challenged my beliefs, read my blog, encouraged my dreams, grounded my feet, and provided support when we lived overseas. In short, they are the best older siblings a girl could ask for and I feel blessed.


{They are also blog shy, thus - no photo}
3. I met Beth when I was 7 years old and we became homeschooling pals who spent hours playing with our American Girl dolls, hosting tea parties, and having sleepover upon sleepover. Time went by, we both got married, started careers, wrote blogs, and eventually went our separate ways. Although our paths have grown apart, she is one of the people who helped me grow as a person, and I know that if something happened in my life, I could send her an email and she would begin lifting me up in prayer. 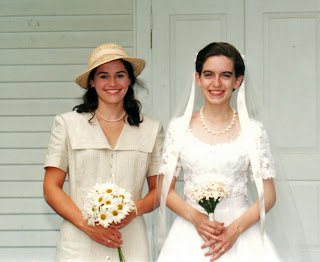 4. Someone else who has been a part of my life for many years is our friend, Fred. When he moved to the area, my family "adopted" him. He celebrates Christmas with us, comes to family birthday parties, was in our wedding, and served on our advisory board when we were working overseas. Fred has influenced me simply by watching his example of integrity in everything that he does. His word means something, people respect him, and he lives his life in a way that is above reproach. It's an honor to count him as a friend and like-a-family member.
{Another shy friend - no photo}
5. Various people that I met and worked with during my summers at a Christian camp. The kitchen ladies (some of whom are seen below, prepping food at our wedding) who encouraged responsibility while we were churning out 40,000 + meals a summer and who gave love and support and were just a blast to work with day in and day out. Mr. M - the staff maintenance man who believed that girls could handle hands-on maintenance. He gave me free-reign over the vacuum repair, taught me how to unclog a toilet, handed me a shovel to dig holes for lamp posts, and gave me the confidence to take on a summer construction job with Teen Missions International. For various reasons, Brianne B., Steve D., Amy M., and Peter S. all come to mind when I think about co-workers who helped me grow as a Believer each summer that I worked at the camp.
﻿

6. George and Mary R. certainly come into play as people who influenced me during my college years. They gave their guest bedroom to Peter (who went to school with two of their sons) while I attended Gordon College outside of Boston. Both George and Mary were great sounding boards during a very difficult year, and Mary exemplified how a Christian woman could be both outspoken and submissive to her husband. Each week-end you could find us hanging out in their den while Mary pieced a quilt and cheered on her beloved Red Sox. Mary lost her battle with cancer in October of 2006, but we know that we will see her again.

7. Once we began serving overseas through missionary aviation, the person who influenced us the most and played in a role in the direction our lives took was Dr. Malcolm McArthur (founder of Flying Mission in Botswana). Malcolm is an incredible man of God with an obvious heart for people. He and his wife spent their lives serving the people of Botswana through medical missions and when they couldn't have a children of their own, they adopted a family. Malcolm is the man who challenged us by asking what we were doing to directly impact people for God. He lovingly called into question the purpose behind the "ministry", and he challenged us to be Light and Salt no matter where God put us in the world.

8. Another person of influence was Roland. Peter first met Roland when they attended Moody Aviation and graduated together as maintenance specialists. Roland and his wife, Karen, and their four kids went on to serve in Indonesia for over 10 years, and Roland continues to be a part of the training of national pastors and missionaries around the world. Roland's way of impacting both Peter and me was simply by handing Peter a book by John C. Maxwell while we we working in Indonesia. Peter began to read about leadership and after coming back from our last overseas station, Roland again gave Peter a book by Maxwell that helped us turn from bitterness and anger to hopefulness about what the future could hold. Roland and Karen continue to be a source of encouragement to both of us and we are blessed to count them among our friends.

9. This might sound a little odd, as this is more of a something rather than a someone, but because of the impact it has had on my life, I think it counts. A year or two after returning home, my faith had become somewhat stagnant - I was at a spiritual standstill and was feeling myself becoming numb. It was a very, very scary situation to be in as the last thing I wanted was to become insensitive to the leading and prodding of the Lord in my life. And then I got a job. It has been the hardest, most challenging thing I have done yet. It drove me to God and His Word because I had no where else to turn. I was despairing, discouraged, overwhelmed, and totally stressed. While it has gotten better (much better), I still have days when I wonder what in the world I am doing there. But God is using it (and the people I come into contact with) to teach me about His faithfulness, my weaknesses, and the ability to use anyone at anytime in any place to bring Glory to Him.
{Sorry, if you don't know where I work, you'll still be in the dark}
10. Last one - and of course I saved the best for last. When I was fourteen years old, I met a person who would influence me more than anyone else on this earth...Peter. In the last sixteen years he has taught me about patience, selflessness, forgiveness, joy, unconditional love based on choice rather than blood, hard work (he has one of the best work ethics of anyone I know), faithfulness, and maintaining a good attitude in some of the worst of situations. He has helped me deal with my anger issues, he has encouraged me to try things I never would have dreamed of doing, and he sees the possibilities when I see the roadblocks. I am a better, more well-rounded person today because of his influence in my life.

11. I lied, because I would be totally remiss if I didn't mention the one Person who has influenced me more than anyone else. I met Him when I was three years old, all alone on my bedroom floor. He tugged at the strings of a little girls heart and I ran into His open arms. He has been my Guide through life for the last twenty-seven years and I'm eternally grateful for His love, His forgiveness, His mercy, His grace, and His faithfulness to me over the years when I have been unlovable, hateful, unrepentant, and a horrible representative for Him. He is Jesus Christ, my Saviour and my Heavenly Father. Without the Lord in my heart and life, I could do nothing. If you don't know Him, I hope you will seek to know more about Him. He wants nothing more than to offer you the same Grace and Salvation that I have experienced. To hear that you met my Jesus in a personal way is the best birthday gift I could ever get.
And there you have it - a list of eleven influential people and situations that have helped mold me into who I am on this brink of my fourth decade. There are many more people who have been a part of my life along the journey, but if I made a list of them all you would stop reading this blog because of my wordiness! It's bad enough as it is! Thanks for your patience and I hope you enjoyed reading about some of these fantastic people. I wish I could introduce them all to you in person - they're even better.
Next month I'll be back with another Countdown to My 30's post. I have no idea what I'll write about, but I'm winging this thing, so stay tuned! In the meantime, if you've had influential people in your life, why not write about them on your blog, or send them a note in real life to say thanks for being a part of who you are today. I'm quite sure it would make their day.