The Sprouts From Brussels For the first 29 years of my life, I turned my nose up at those little green mini-cabbage-look-alike that claimed to come from Brussels. In fact, I literally gagged on one while attempting to be polite at an elderly couple's dining room table (you know, take a little of everything, even if you don't like it) - when I was 25. As a married woman, I was passing my Sprouts under the table to my husband so that he could eat them and I wouldn't look ungrateful! The point is, I declared my total loathing of Brussels Sprouts and swore that they would never enter my home nor grace my table.

I recently had to eat those words, along with some Brussels Sprouts.

A year ago my sister brought her dinner to the table (she cooks her own food for all meals as she has Celiac Disease and a host of other food allergies) and I was drawn to the amazing smell of something on her plate. In answer to my inquiry, I was told that they were Brussels Sprouts. How could this be? Brussels Sprouts are nasty little balls of ickiness that I hate! The smell that I was enjoying couldn't possibly be the same thing that I gagged on a mere 4 years earlier.

After the unthinkable happened - I tried a bite and didn't gag - I asked for the recipe. I didn't think about it again until almost a year later when I stumbled upon a bag of fresh Sprouts on clearance for $0.99 at my local grocery. After a year of discovering that I actually liked fish (when correctly prepared and de-boned), mussels, and mushrooms, I figured - why not? If I hated them, I knew Peter would eat them and even if he didn't, I would only be out a buck.

In the end, I only wished I had purchased more than one bag. 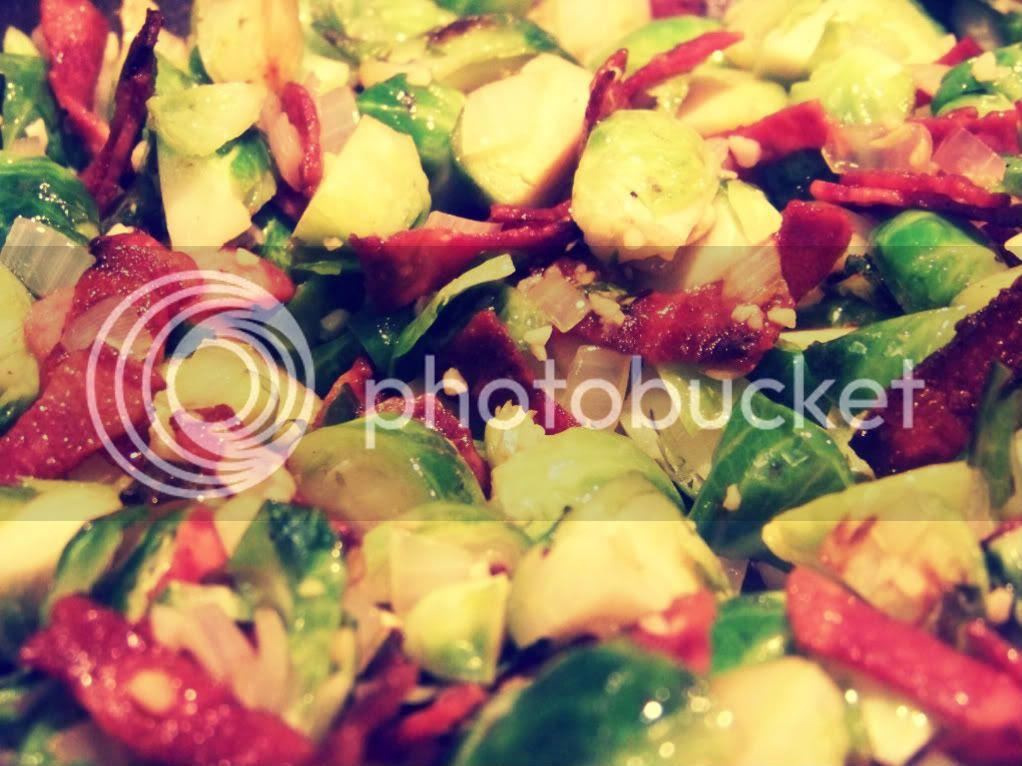 So what happened? I once again learned that it's all in how you prepare the food. When I fell in love with the Trout Wolf at Carrabba's earlier this year, I discovered that not all fish has to taste like frozen Fillet 'O Fish, and if it's prepared well, the sky is the limit on what I'd be willing to eat (or at least, try). Believe me, 2011 was a banner year for trying new cuisine. While living overseas helped broaden my palate, it has only been in the last twelve months that I have truly stepped outside my taste buds comfort zone and discovered my inner Julia Child. I blame it on the roux from the Chicken Andouille Soup - but that's a whole other story.

So, if you're curious about how I cook my sprouts, then you will need:
Slice and dice the uncooked bacon and throw it in a pan (big enough and deep enough to cook the whole mixture in later on). Cook bacon until crispy, then add olive oil, diced onions, and garlic (you can add the Brussels Sprouts at this point if you want, or you can wait - I've made it both ways) and cook until onions are translucent. While that mixture is cooking, I cut off the bases of all the sprouts and then cut them into quarters (top to bottom - twice). If you haven't already done so, toss the Brussels Sprouts in with the onions/garlic/bacon mix and add more olive oil (as needed). You're looking for a slightly crisp sprout in the end - cooked through, but not mushy at all. After 3 minutes or so, I add Balsamic vinegar to the mix (no measurements, but probably somewhere around 1-2 tablespoons - go with your gut). Cook until the Brussels Sprouts are starting to show a little brown crisp on them and you're done!

NOTE: If you want to add the apple chunks, my sister does that close to the end. You might also consider adding some Craisins, but I haven't tried that yet.