Two years ago we were seated in a posh restaurant, preparing to enjoy the most exquisite dessert - some kind of chocolate ball that the waiter poured hot fudge sauce over, melting the top to reveal the raspberry cream within... amazing, to say the least.

As the man placed the plate in front of me, he paused with the hot sauce poised over the top of it as my two dining companions and I stared at him. One second, two seconds, three seconds (this was starting to get awkward, what was he waiting for?)... until finally he asked, "Do you not want to take a photo of the dessert before I pour?" Taking a moment to process what he'd said, I blurted out, "No... I just want to eat it!" The waiter instantly changed from a pre-programmed robot to a human being who said,


"You have no idea how refreshing it is to hear someone say that! Everyone wants a photo of the food before and after, instead of just savoring the moment."

There have definitely been meals when I have taken a photo because I want more than a memory to remember the end result - an anniversary dinner, a special meal in a foreign locale, the triumphant success of an unsure cook. This last fall, it was a loaf of pumpkin bread that I made in a specialty bread pan that actually popped out perfectly - a moment I was (and still am) insanely proud of! 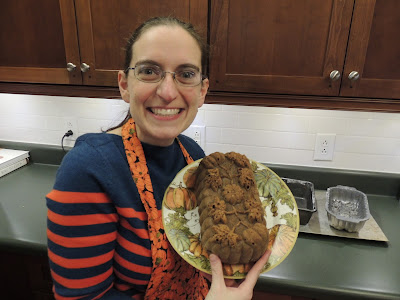 But there have also been times when my (smarter and less tolerant of social sharing) husband has looked at me and said, "put the camera down and eat the food while it's hot!" In other words: savor the moment.

Do you remember life before social media took over? Life before selfies and instagram and in the moment sharing? When you decorated a room in your house and no one knew (if you've read this blog, or followed my Facebook page, you know I'm not pointing fingers!)? Or, better still, when our thoughts - religious, political, or random - could only be shared over dinner with the family, sparking give and take conversation and debate, not angry retorts posted in the heat of the moment?

Social sharing isn't all bad. My grandmothers lived a thousand miles from us, so my childhood was captured on film, printed out, and delivered by the United States Postal Service once or twice a year to show how I'd grown. Today, my friends around the world can instantly update long-distance family with photos and videos of their child's latest and greatest achievement. Hooray for technology (and the ability to unfollow those updates on Facebook)!

But sometimes, I don't want to know it all. Sometimes it's nice to be in the dark until you can catch up face to face - asking questions and engaging with each other. Last week, we received a birth announcement in the mail from a friend who I didn't even know was pregnant. What a lovely surprise! She hadn't documented her ever-growing belly on a weekly basis, or plastered her cravings or labor progress on social. All that I got was the unexpected (good) news, and like the waiter, I found it refreshing.

Even if you don't share it with the world, savor the moments.
Email ThisBlogThis!Share to TwitterShare to FacebookShare to Pinterest
Labels: #my2cents, The Online World