Clutter, Stewardship, and The "One Touch" Rule

There's a part of my personality that absolutely abhors clutter - in all it's various forms. Curious thing though, had you walked into our home two months ago (or into our basement for any of the 15 years we've lived in this house), you might have wondered if that side of me had gone into long-term hibernation.

During the days of waiting on adoption paperwork and country decisions, there's not much that these two recovering-INTJs can control. We'd filled out the forms (in triplicate), made copies of everything, shipped it all off to be processed, and were feeling a bit out of sorts with the time we had on our hands. However, it was during this lull in activity that the blinders to the household chaos seemed to come off, and we were truly appalled by what we saw.

Stuff. Everywhere. Stuff in the closets, stuff on the counters, piles upon piles, and enough empty cardboard boxes to move an army. The switch flipped and we went into major purge mode.

For the first time since we moved in, you can walk through all areas of our basement without tripping over Styrofoam coolers, shopping bags that used to hold jar candles but were now just housing the empty paper wrapping, and a plethora of "we might be able to use this some day" mistake purchases.

The result of cleaning out the clutter was more than just peace of mind and tidy spaces, it was a very timely reminder of a large chunk of our lives when we were less frugal than we would like anyone to know. 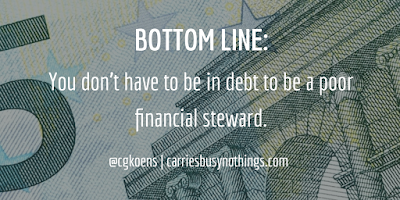 In the weeks since our purge, we have both implemented the principle of "touch it once" - meaning that when something comes into the house, we aim for the goal of touching it one time. It comes in, and we deal with it. We file it, store it, toss it, or use it immediately. It doesn't find a home on the kitchen counter for the next month. It doesn't get tossed on the basement floor to be dealt with later. If we don't know where to put it, we find a permanent home so it doesn't get flung into a spare closet to disappear for years.

In fact, part of this purge came about when we found out we needed to turn our guest bedroom into a room for a little boy (we were set up for 4 girls, but when those girls had a little brother... bye-bye guest room!). Losing the guest bedroom meant we also lost the last remaining "spare" closet in the house, so everything in there had to either find a new storage home or disappear. It's amazing how much of it left after we realized that we hadn't pulled it out in years. Lack of storage can be a (first world) pain, but an excess of it can be just as bad when it causes you to keep stuff you don't need, don't like, don't want, and don't use.

Over a month out, our kitchen counters are still clean, our dining table is still free of piles, our basement is actually a pleasant place to spend time, and our wallets are more securely stowed. Developing a habit - good or bad - doesn't happen overnight, but one day at a time. One day at a time, we're choosing to pick up, put away, and deal with the mess in the moment instead of putting it off for later. It makes me wonder...


...what else in my life have I been putting off until later that would free up mental space if I just did it now?

Something to think about...