We live in a house with three bedrooms, three bathrooms (thank you, Lord!), a great kitchen, a large yard, and a small mortgage. When it was just the two of us, it felt spacious and inviting and we couldn't imagine ever moving. This house was turned into our home through a lot of hard work. I'm super proud of the fact that the brick wall on the outside of our house was laid by my hands, that my stud of a husband built and raised the back wall of our kitchen by himself, ingeniously using a system of ropes and pulleys, that I faced my fear of heights to help him hoist every 4 x 8 sheet of roofing up through the attic, and that the tiles in our bathroom were all cut by me and installed by the Hubs. This house is an outpouring of our blood (literally), sweat, and savings. In the words of George Stanley Banks, I love this house.

When we decided to adopt four kids (before it bumped up to five), we knew we had a short window of time (and money) to finally renovate the front half of our 1940 bungalow. Being a few years older this time, we hired out more of the work, but still put in plenty of sweat equity in order to complete the job. By the time we were done, the front bedroom included a walk-in-closet, an upstairs loft, and an en suite bathroom. The living room and dining room looked like we always imagined they could, and the original 9' ceilings were back in all their glory. I never wanted to move.

And then we were matched with five kids - including a boy - and suddenly, instead of putting four girls in two rooms, we were going to put all four in one room (with the loft) and the boy in his own, smaller room. And the house started to shrink. Still, I knew that I didn't want to take care of much more than what we already had, so when people asked if we were planning to upsize our home, we rebuffed the idea completely. While in Central America to adopt the kids we all lived in a two bedroom, two bath, 900 sq. ft. condo, so when we returned to the States two months later, our house felt palatial! Until one day it didn't.

What we - as brand new parents - failed to factor in was the differences in nighttime habits and bedtimes between a 4 year old and a 12 year old. And suddenly, the need for another bedroom became clear. At first we discussed ways to add on to our house - AGAIN - or create a fourth bedroom somewhere in the existing space, but each idea came to a dead end. This left us with the option of moving - something we never would have considered in years past, but found ourselves discussing more and more often.

In fact, this last week we went beyond talking and actually went to look at three different houses. It felt a bit like Goldilocks - this one is too small, this one is too tight, and the price on this one (before the necessary gutting and renovating) is just right. There's something about stepping out from theory and actually looking at houses to make you appreciate what you already have.

Yes, we still see a move in our future, but what these houses showed us was that the timing wasn't right - we were forcing it. There are financial goals that we'd like to meet before we upgrade and house projects we'd prefer to complete before taking on something new, so for the time being, we've settled back into a life that's working - if not perfectly, at least well enough. Home is, after all, wherever you are loved, and we have plenty of that to go around. 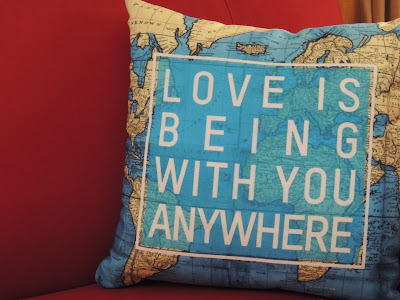