Be Anxious For Nothing (Part 1)

Confident. Independent. Happy. Secure. For the first 32 years of my life, I was all of those things. Then in the middle of the year of 2014 - and half-way through our 4 year adoption process - God began to break me.

Instead of feeling confident, I was in a constant state of anxiety. Instead of being independent, I felt like I was falling apart. Instead of being happy, I was continually on the verge of tears for no known reason. Instead of feeling secure, I was overwhelmed by fear. When I started waking up in the middle of the night in an utter state of panic, gasping for breath while I sobbed uncontrollably and barely able to get out the words, "GOD...HELP ME!" I knew something had to change.

What in the world happened? What was going on? And most importantly - how could I fix it?

In early December 2014, a few days after my 33rd birthday, I finally went to the doctor to make sure that I wasn't dying (as my brain told me that I was), and after being informed that some of the symptoms I had shared were actually related to my gallbladder (which was removed the next month), she looked at me and said, "You're having panic attacks." No, not me. I don't do that. Panic attacks only happen in the minds of people who don't trust God, and I obviously trust God totally because I'm following Him on this crazy journey of adopting a bunch of kids, right? Not quite. As it turns out, I had fallen much farther away from God than I realized, and the next few months would turn into some of the hardest - and BEST - journeys back to Him that I have ever experienced.

As I took in what my physician was saying, I heard her offer to write me a prescription for an anti-anxiety medication and refer me to counseling. That was when my INTJ brain snapped into place (and one of the many times that I have been grateful for the personality that God gave me) as I glanced at the Hubs and then replied, "No, thank you. I just need to spend a whole lot more time with Jesus." I could see the skepticism on her face, but she accepted my response and assured me that if I changed my mind, she would be happy to provide one or both of her previous offers. 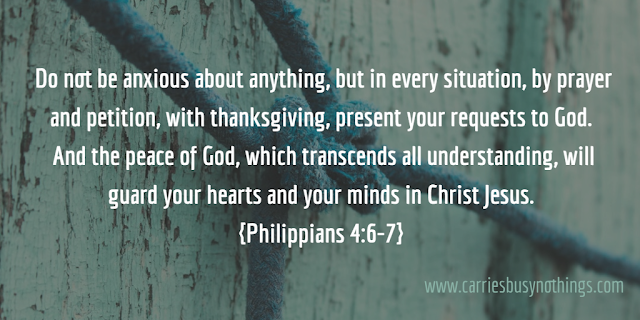 When we left the office, I felt a sense of relief in knowing that - physically - there was something I could do (have my gallbladder removed) that would help, but that I also had an answer for what was going on in my brain. As an INTJ, all I needed was an answer in order to become highly focused on finding a solution to fix it, and that's exactly what I set about doing for the next four months as God broke me apart, repaired the fractured bits, and helped me discover all that I had been missing in my relationship with Him.

Over the next few weeks, I'd like to share that process with you in the hopes that it may be an encouragement to anyone who may have dealt with similar issues, or may be going through a difficult time right now. This is my story - the one God wrote for me and took me through - and it will be different than yours, so I ask for grace as I share it with you over time.

Of Note: If you are in counseling or taking medicine to help you get through this time, please don't tune out now because you think I'm going to judge people for that. I'm not - I simply want to share my story, and how God allowed me to go through this valley so that I could learn to totally rest in Him. Let me be CLEAR: God uses any number of things to lead us back to Him - so I am definitely NOT saying you should try to be a lone reed here. Please hold your comments on this aspect until I have had time to share the whole story. Thank you for respecting this.
Email ThisBlogThis!Share to TwitterShare to FacebookShare to Pinterest
Labels: #WorkInProgress, Anxiety, INTJ, My Faith