It's Not About Who YOU Are, But WHO You Know

My cousin (first, twice removed) died this morning. He lived a long and productive life, honoring God in all that he did, always taking the opportunity to share his faith and follow the calling God placed on him when he was a young man. A hard worker, a faithful husband, a loving father, a loyal family member. No matter how busy he was nor how important he became, he never forgot those who supported and encouraged him in the early days.

My cousin was Billy Graham. 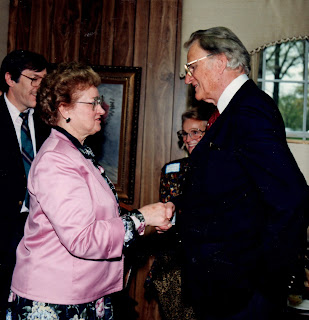 Growing up Graham, I was used to getting the question of whether or not I was related to the famous evangelist, but as the years went on and the country changed and Billy slowly aged out of the spotlight, the question came less and less often. There is no doubt that Billy was a man mightily used of God throughout the world. His integrity was of the highest standard, his faithfulness to follow the calling of God something that each of us should look to as an example, and his humbleness something to emulate. And yet...Billy was just an ordinary man who allowed himself to be used by an extraordinary God.

I remember my mother (a Graham by marriage) telling people that Billy put his pants on, one leg at a time, just like everyone else. He didn't live on a pedestal, nor did he desire to do so. When he was a young evangelist, he used to come out to the family farm in Oklahoma where his uncle, my great grandfather, would encourage him to persevere in his calling. Billy had good days and bad days, just as we all do. He knew discouragement, but he also knew Who to seek out when those times came.

In 1990, the Graham family decided to hold a big family reunion in North Carolina. Cousins poured in from Oklahoma, Tennessee, and Georgia. Word on the street was that Billy and Ruth would be in attendance, and sure enough, there they were. I love the photo of my grandmother speaking with Billy (above), but what I treasure more is the family photo we took shortly thereafter. 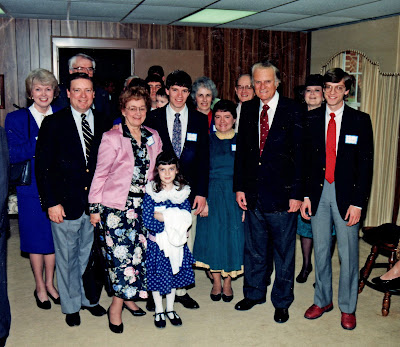 Of course it's fun to have a memento of meeting Billy, but as I was looking at this photo again this morning - after the news that Billy passed away - I was struck by something remarkable. What an amazing heritage I have been blessed with, and it has nothing to do with Rev. Graham. Standing with her arm around my shoulder is my grandmother, who loved Jesus right up until her sojourn on this earth ended 9 years ago. Next to her is my father who almost died 12 years ago, but whom God has graciously left with us for an extended period of time. Behind my father (top of the head) is the second "Billy Graham", my Uncle Bill, a godly man who was a pastor and then a business man, a loving husband, father, and grandfather, and who was waiting in Heaven to welcome his cousin Billy this morning. Just to the left of Billy is Uncle Tom, another Graham pastor who served God until the moment that he heard "Well done, good and faithful servant" two years ago. What a heritage! Men and women who loved the Lord, just as their parents had.

You see, what struck me this morning was how Billy was just one of any number of Grahams (and Smiths and Joneses and...) who have spent their lives ministering, serving, teaching, and admonishing. It's not about being a Graham (though I am profoundly grateful to be surrounded by such an incredible group of people, and am blessed to call them family), it's about being a part of the family of God.

God calls His children to love and serve Him, wherever they are. We may have a worldwide stage or we may be called to remain quietly at home, serving and instructing our families for Christ. Wherever He places us, may we be faithful, no matter what our surname.

“Someday you will read or hear that Billy Graham is dead. Don’t you believe a word of it. I shall be more alive than I am now. I will just have changed my address. I will have gone into the presence of God.”
Email ThisBlogThis!Share to TwitterShare to FacebookShare to Pinterest
Labels: My Faith, Personal