Let's just make this quite clear: I love Goodreads giveaways. I'm always signing up for them and rarely win, but when I do... well, make room for the Bookworm Happy Dance!! Back in April I won a copy of The Lost Vintage: A Novel by Ann Mah (author of Mastering the Art of French Eating - which I loved), and the {Happy Dance} that went down was intense.

This was a book that I really wanted to read when I first heard about it in her monthly e-newsletter (see, I'm actually a fan because I never sign up for newsletters!). Although I tend to prefer non-fiction to novels, I was willing to overlook that fact because I enjoyed Ann's other autobiographical works, and because it was set in France (which, you may or may not have noticed, but I have a "thing" for). I'm happy to report that The Lost Vintage did not disappoint. 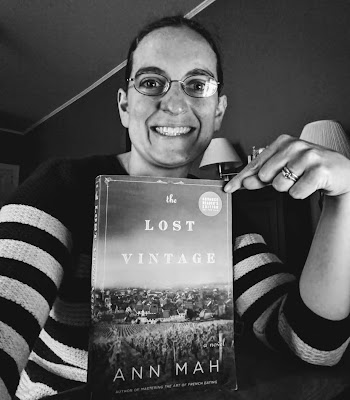 The book takes place in two historical points of time - WWII and present day, and covers the lives of two characters - Hélène and Kate, who become forever entwined through the story of Hélène's life that Kate slowly uncovers while cleaning out the basement of a family farmhouse in the French countryside.

Kate has a complicated history with her family and France, which includes a vineyard farmer-turned-ex-fiance, and an uncle that everyone is a little afraid of. Just after college, Kate and her friend, Heather, find themselves with a summer to kill in France and hearts that are ready for romance. While Heather ends up marrying Kate's French cousin, Nico, and raising a family in France, Kate gets cold feet about marrying Jean-Luc and returns to the United States to pursue a career as a wine expert.

When she finally returns to France several years later, her world is rocked by the revelation of a deep family secret that dates back to the darkest days of WWII France, and involves a hidden wine cellar, a Nazi collaboration, and a betrayal that is still affecting the family some 70+ years later. I don't want to give too much away, but suffice to say, despite it's status as "fiction", I was compelled to do some light research about the shaming of women in post-war France and was appalled by what I found. This fictional story and character are based on actual events, and were told in such a realistic way that I kept needing to remind myself that this particular story was made up. Mah did an excellent job of painting an accurate picture of the time, and portraying the lives and lies of Hélène and her step-mother.

Beyond the historical segments of the story, the present-day issues of family feuds, unrequited love, and the almost-impossible Master of Wine examination are entertaining and fuel the remainder of the book. I could have done without the love scenes (though, for a fictional, secular book, I suppose they were tastefully done, without a lot of graphic detail), but I wanted to mention that as a side note for those who may not be interested in a book with premarital relations.

There were times when I had to put this book down and read something else, but I think that's a tribute to the author as her story drew me in so much that it became too intense to see what else Hélène had to endure. I needed a break from the historical segments, in order to process what was going on. I believe this is due to the fact that Mah did her research on Nazi collaboration during the occupation of France, and the aftermath, and masterfully wove that truth into her fictional characters.

***SPOILER*** Happy endings abound and Hélène's story isn't as sad as one might suppose. Which I like. It's fiction, I don't want to be bummed at the last page.

The Lost Vintage: A Novel was released to the world this week, and if you enjoy historical fiction, are a secret Francophile, or enjoy a nice glass of vino, then I would say you would find this book to be a highly enjoyable beach read. I'd give it 4 stars out of 5... as long as those previously mentioned topics are of interest to you. 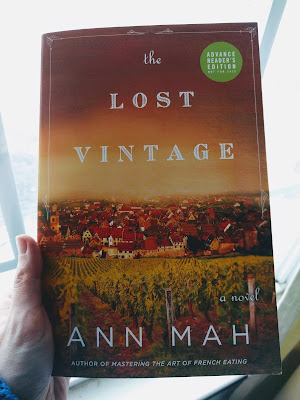 Special thanks to Goodreads and William Marrow Publishers for my Advanced Reader's Edition!
Email ThisBlogThis!Share to TwitterShare to FacebookShare to Pinterest
Labels: Bookworm, History, The Online World