What's On My Nightstand (The #MinimalismSimplified Edition)

Last month I read Goodbye, Things: The New Japanese Minimalism (Fumio Sasaki) through the Prime library of books available to borrow through Amazon. Although I have been interested in minimalism for a number of years now (even blogging about my attempts to purge in the past), my focus on simplifying and clearing out has definitely evolved into more of a necessity for sanity after we adopted our five kids in 2016.

The draw of minimalism first started about twelve years ago, when the Hubs and I worked internationally and lived out of our suitcases. Whenever we would come back to our home base in the States, I would look around our house and wonder why I needed so much stuff if, the rest of the year, I could live out of a suitcase or two. And thus began my own journey of pairing down and simplifying. Nothing as extreme as Mr. Sasaki and his empty rooms, but resulting in a change of behavior and several large trips to a local non-profit for donations upon our full-time return to life in the U.S. in 2009.

A few years later, during our adoption prep, we did a pretty substantial purge of the house and basement, taking car load after car load to the donation site (to the point that I was becoming embarrassed to show up for fear of looking like hoarders - which, in all honesty, I was beginning to feel like!). After the kids arrived we had to find a way to deal with all of the detritus that children tend to collect - papers from school, craft projects, rubber bands, dollar toys, party favors, and (literally) trash that they beg to keep (I just told a daughter this week that, yes, she had to throw away the paper plate from a church party rather than take it home to use with her dolls). It is a never-ending battle to keep the house cleared of the clutter, and just when I feel like I'm getting a handle on it... summer camps arrive.

The struggle is real.

So when I saw goodbye, things in the Prime library, I didn't think twice before clicking "download" and beginning to read. As I have figure out what it means to have a houseful of people (7 of us), I have developed my own brand of minimalism. Trash goes out, special objects go in the memory box (I have one for each kid), and we regulate a lot of stuff to "jail" if it cannot be put away properly at night. The kids are learning, and we're working to help them figure out the difference between buying for need and buying for wants. I am constantly looking around the house to see if there's something more I can put out. This week, for example, it was 11 mugs that I would have considered "must keeps" two years ago, but I now realize that we use the same 4 mugs all the time, so why keep the rest? Baby steps.

Specifically about this book, I want to say three things:

First, it is well written. I know nothing about the author, but based on the number of times that he mentions an English language learning book or program, I'm making the assumption that English is not a strong second language for him, and yet the book is written in English (again, assuming it was put through a translation process). Well thought out, well laid out, and easy to work through. I enjoyed his 55 and 15 points of minimalism and the lessons he learned from his experience.

Second, I appreciated that he makes it clear that there are many levels of minimalism, and there is room for all. That minimalism may mean purging everything for some, or simply gaining perspective for others. One thing that I took away from his book was the fact that I am, without ever thinking about it, a minimalist when it comes to a circle of close friends. Oh yes, I have a very broad group of acquaintances, of varying degrees of closeness, but a very limited circle of "Inkling" friends, which I'd never thought about in terms of minimalism until I read, "Goodbye, Things".

Finally, I feel it's important to include a caution not to turn minimalism into a religion (which it very much can be for some). Otherwise, if you're interested at all in the Japanese take on minimalism (especially of you have access to borrow books through Amazon Prime), I would recommend this as a good starting point. It wasn't earth shattering or full of things I hadn't already thought of or discovered, but it was still thought provoking, and that's always a good thing, in my opinion.

As I continue in my personal quest to calm the clutter, I have realized that - for me - I'm just looking for a simplified life. I don't want minimalism to take over my life or become a god to me, nor do I want to give in to the tide of paperwork and consumerism that threatens to overwhelm. I will not give up the fight in the Great Stuff Battle, but I also understand and accept that in a house of 7, there is going to be more of it and what seems like rubbish to me is something special to a child. Yes, I want a clear desk to work from, but I also want my Jane Austen action figure right there with me, because she makes me smile. I want clutter-free surfaces in my living room (which I have accomplished and kept - a definite win), but unlike Mr. Sasaki, I also want my couch. There's room for simplicity and minimalism as well as comfort and a small amount of chaos - a livable balance. Minimalism Simplified. 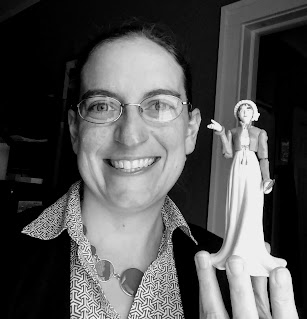