The Importance of Getting Outside

I've always been proud of the way that I throw my kids outside on a regular basis, to play, ride bikes, or climb trees. We live on a half-acre in the middle of our small town, so they have room to run and yell and get out all their energy (sorry, neighbors...raising them like it's the 1980's!). But I've recently been reading a book that has challenged my view about how and when I encourage the kids to go outside, and I realized that the words, "It's too cold," or "It's been raining," have come out of my mouth a little too often. As the title of the book suggests, There's No Such Thing as Bad Weather... you just don't have the right clothes.

The book, written by a Scandinavian mom who now calls the American midwest home, outlines how the Scandinavian parenting view of outdoor time differs wildly from the protective, safety first mentality that is so prevalent in the United States. When she parked her baby pram outside the backdoor for her girls to enjoy their naps in the fresh air, her neighbors thought she was insane. When she took her kids to a state park to allow them to swim in the stream, she received a ticket for leaving the marked trails. But when she returned to Sweden with her girls for a six-month stay while her dad dealt with health issues, she was reminded of the freedoms that she enjoyed as a child, and had to relearn the art of letting go and allowing her children to experience life - in all it's dangerous glory.

From birthday parties in the snow to rainy day walks and letting her kids go to the park down the street on their own, McGurk shares how giving children these types of freedoms is not only good for their mental and physical health, but it allows them to develop independence and learn from their mistakes. In general, the book is a strange dichotomy of liberal thinking (think: save the planet) and the rugged individualism that used to be so prevalent in the U.S., but has given way to the cry of "safety above all else!" And it made me seriously rethink the ways in which I viewed outdoor play and encouraged independence and problem solving in my little brood. Which is why I found myself on Amazon, ordering rain boots last week.

When the boots arrived, I brought them out one at a time for the kids to try on. After the fourth one received his pair, I told them that the reason I purchased them was so they would be able to go out and play in the rain and mud and it wouldn't matter. By the squeals and yells of excitement, one would have thought they were headed to Disney World. Who would have thought that rain boots and permission to go out and get dirty would be that exciting? Except...that's exactly the way I grew up...and nothing was more exciting to me than a day spent outside in the rain. And nothing was more cozy than coming inside from that rain, to dry off and warm up in a blanket, with a mug of hot cocoa. And so the tradition continues... 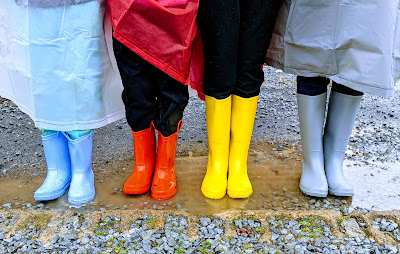 Do you have any rainy day memories?
Email ThisBlogThis!Share to TwitterShare to FacebookShare to Pinterest
Labels: #HealthyHabits, #iamthankful, Adoption, Parenting