Upside Down or Right Side Up?

Back when we were still in the paperwork portion of adopting our five, I was freaking out about all the changes that would be coming our way. One morning, after a particularly stress-filled week (or what I thought was stress at the time - HA!), as the Hubs was about to walk out the door, I remember looking at him and moaning, "I like my life the way it is, and they're going to turn our lives upside down!" At which point, as my patient better half grabbed his lunch box and prepared to head out the door, he stopped, looked at me, and quietly said, "Have you ever considered that God might be turning our lives right side up, instead?"

Bottom line: it's all in how you look at it.

Much like a sweater that this same sweet man got me off my Amazon Wish List this past Christmas. It was a last minute add, and I really didn't think he'd buy it, but when I opened it up on Christmas day I was pretty excited that he had, as I was feeling a bit under the weather and the sweater was a lot like wearing a blanket. In fact, when my parents dropped by a few days later, my dad (who was an Army flight surgeon in Vietnam) kindly informed me it looked like I was wearing an Army blanket. Fortunately, since wearing a blanket was exactly the look I was going for, that didn't bother me, nor stop me from sporting it on a regular basis. I liked it so much I even decided to add a couple more colors to my Wish List for 2021. Which is when I discovered that I'd been wearing the sweater upside down the whole time.

In my defense, it must have been a common error, because Amazon had photos on their sales page for it, showing the "Right Way" and the "Wrong Way" to wear the sweater. The cute, envelope-like folds at the top of my sweater were, in actuality, supposed to be at the bottom of the sweater, and the section I assumed was the collar, was intended to end just over my derriere. Realizing my mistake, I removed the sweater, turned it around, put it on...and hated it. The part I formerly assumed was a collar drew undue attention to my backside, and I missed the little flaps at the top, so back around it went. Because sometimes, as Bob Ross used to say, it's a happy little accident. 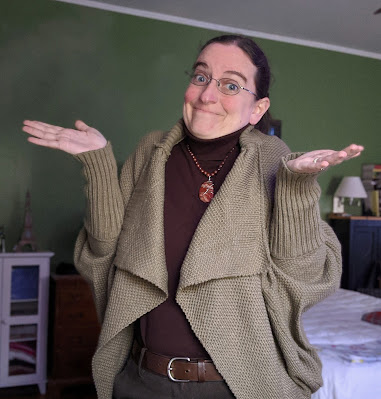 As I was thinking about this sweater and discovering my happy little accident, the U.S. Capital was in turmoil. My connections on Facebook were evenly divided between the Union and the Confederacy 🙈 the those who, four years ago, thought the world was ending and were now calling out the "rich, entitled, whites," and the ones crying foul, declaring conspiracies, and closing their Facebook accounts. Both sides egged on by the media, I might add. I unfollowed a few people, just for my own sanity, and then decided to turn my focus on the One who ultimately wins. Because my hope isn't in a political party or a President, but rather in King Jesus. Whatever happens in the next 4 weeks or 4 years or 40 years, I know I will find peace nowhere outside of Him. And neither will my friends on either side of the political spectrum.
And since I happened to be wearing my upside down sweater, I was reminded of how many times things that seem like the end of the world as we know it—whether upending a comfortable life by adopting five kids, or trusting that God is still in control when your candidate didn't win—aren't, in fact, actually the end of the world. And looking back on the last four and a half years with the kids that were going to turn my world "upside down," but who actually turned things right side up, just as the Hubs suggested all those years ago, I find myself wondering, yet again, if this apparent tearing apart of our country, the line being drawn in the sand is, in fact, another right side up moment.
I guess it's all in how you look at it.
Email ThisBlogThis!Share to TwitterShare to FacebookShare to Pinterest
Labels: #my2cents, Adoption, Anxiety, My Faith, Personal, The Online World