Summer Stack Update (A What's On My Nightstand #WOMNS Post)

Hello all! As I mentioned in my last post (back in early May), I made the conscious choice earlier this year to spend less time online, specifically on social media, and have no regrets so far with that decision. Not only is there less drama in my life, but I have more time to do other things, like hang out with my kids and read books while they play in the pool. So far it has been a win-win. And even though I still work online, blogging got thrown into the "social media" pot so I haven't been on here as much either, but today I wanted to jump on to highlight one of the books I just finished up from The Stack. I got sidetracked by several ebooks on my Kindle (currently reading Junkyard Planet by Adam Minter - which has been really interesting), so my progress on the Nightstand Stack has slowed a bit. However, I'm still plugging away, and hoping to make the most of the next 6 months. I'll keep you posted. 😊 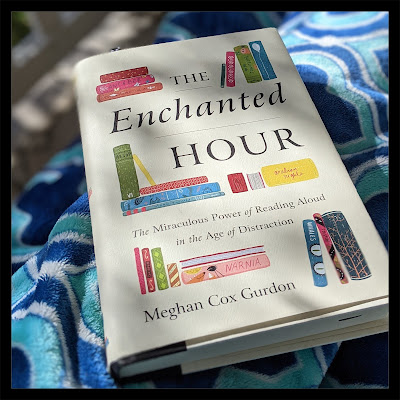 Today's review is of The Enchanted Hour: The Miraculous Power of Reading Aloud in the Age of Distraction, by Meghan Cox Gurdon. Now, as I said in my review on Goodreads, I did not need a book to tell me that it's important to read aloud to your kids. That's something I've known since my mother read to me as a child (thus turning me into a bookworm), and was solidified by my own experience of reading to our kids (I'll get into that a little bit more in a second). However, Gurdon does a fantastic job of laying out the research and presenting her reasons for why this is not only important for turning children into readers, but also in their physical development, mental well-being, and even bridging the divide between parents and children as kids move into and through the minefield of teenage angst.
Our Reading Story
In 2016, the Hubs and I sat in a small, dark office of a children's home (a.k.a. orphanage/care facility) in Latin America, just minutes away from meeting five kids who would eventually take on our last name and become an intricate part of our lives as we all slowly learned what it meant to be a family. In these last few minutes before life, as we knew it, changed forever, I found myself asking the in-house psychologist what each of these kids enjoyed doing. I was trying to discover hobbies, interests, anything that might become common ground in a situation where nothing was common - from language to life experience. When I asked if anyone ever read to the kids, the psychologist began laughing and said, "Read? To these children? Ha! None of them have the attention span to handle that! I tried once or twice, but it doesn't work. You'll never get these kids to sit and listen. All they want to do is watch TV."
Challenge accepted.
To put it mildly, the adoption was difficult from start to finish. The oldest was 12, spoke no English, hated the world, and us most of all. I can't say that I blame her - everything in her life had been taken away, changed, or forced upon her, including learning a new language. The first night we were home, I went into the bedroom and found her madly studying Dr. Seuss's ABCs, trying to read the English, and making marks in pencil above words she thought she knew, writing the Spanish equivalent above or below "elephant" or "horse" - words that she could tell from the pictures. I still remember, a few weeks later, when she finally approached me and asked, in her thick Spanish accent, "What does zizzer mean?" I asked her to repeat the question, and then again, and finally said, "That's not a word, where did you hear it?" At which point, in complete frustration, she stomped over to one of the bookshelves in our home library and pulled out the ABC book, flipped to the Z page, and then I got it. Dr. Seuss's nonsense words were lost in translation, but a memory was made.
I read that ABC book so often, to so many kids, that I unintentionally memorized it. Over and over we would read it together, as they learned new sounds, words, and—for some—even the alphabet. These days we've advanced quite a bit from Dr. Seuss (even though the youngest four, now ranging in age from almost 9 to a newly minted teenager, still request them from time to time during our nightly reading sessions). From Seuss to Tolkien (The Hobbit was a hit), their worlds continue to expand. There are times when the Hubs and I glance at one another during our nightly reading rituals (often lasting an hour or two, depending on the number of books we have going at the moment, and my level of wakefulness), and share a knowing look, as we hear the kids sucking in their breath at a particularly intense part of the book, or chuckling when Grandma Georgina complains again about Mr. Wonka and his antics. My favorite moments are when one of them suddenly gets the subtle meaning or understands a play on words, because it shows a deeper grasp of the English language. If only the psychologist could see them now... 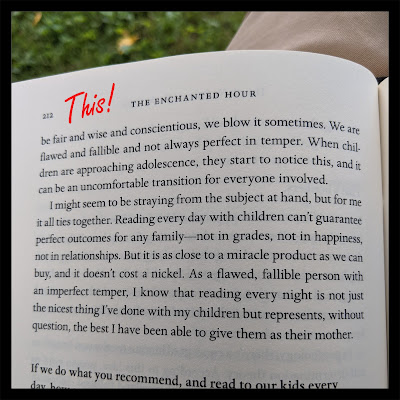 I think the most surprising part of The Enchanted Hour, for me, was when Gurdon touched on the power of reading to older children, and the way it creates a bridge during adolescence (see quote above, starting with "we blow it sometimes"). I honestly hadn't spent a lot of time thinking about it, but when I read this section, I instantaneously knew she had hit the mark. The oldest's transition to a small private school was made as easy as possible for her, including allowing her to read the Spanish translations of the classroom literature assignments while listening to the English audio on YouTube. But after her first six months the instructors moved her to the same books as her classmates, and she floundered a bit as she struggled to read along. And that's when I stepped in.
Despite ongoing angst in our personal relationship, during those months, when we spent hours together each night while I read through The Giver, I Am Malala, The Secret Garden, and Sherlock Holmes' The Hound of the Baskervilles, it was more than just getting through a reading assignment. I found myself not only in the role of reader, but also that of history instructor (trying to explain 9/11 and the ensuing war to a child that came to us knowing nothing about anything outside of her birth country), culture and religious expert, and all around encyclopedia (try reading Sherlock Holmes sometime when you don't have a concept of what a carriage is!). Although she has not become a book lover like the other four, I still look back on that year of reading aloud for school, and realize that sometimes, it was the one thing that gave us common ground, even if just for an hour at night.
With one year left until she leaves for college, we still don't have much in common. She's doing her life, and I'm raising her four siblings. It sometimes feels like I have two different families living in the same house. But the other night she happened to be home for dinner (a rare occurrence these days). And as we all sat around the dinner table, she looked at me and said, "Remember when we read Sherlock Holmes? I'd kind of like to hear more of that. Maybe you should read it to me." I tried not to fall off my chair or look too excited. After all, I knew it was just a fleeting moment, a passing idea, but it thrilled my bookworm heart that it even crossed her mind. Who knows? Maybe one day I'll find myself in her living room, reading Dr. Seuss's ABCs to her little boy or girl, my grandchild. And maybe, just maybe, she'll finally allow herself to sit and enjoy the comfort and connective power of reading aloud. Walls torn down, one book at a time.