When I originally decided to focus on 12 things this year (one per month), it made sense to me to make one month all about the money. I knew we had some big expenses coming up (some home improvements we'd been putting off for years that could no longer be put off, a possible family vacation, college for our eldest, on top of a huge job transition), and after focusing on the cleanout in January, it was time to spend some time focusing on how to curb the outflow of cash. Here's the short version... 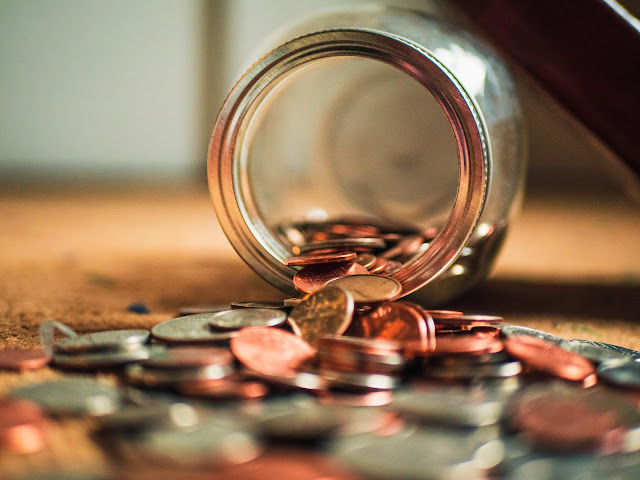 When I decided to focus on ways to save for the second month of 2022, I wasn't sure what all this was going to entail, other than a general idea to set aside $12 a day into savings. But as the month progressed, new ideas came to mind and I started to think outside the saving box and get a little creative in our ways to save.

Let's talk about Save a Penny. I've kept a jar on my desk for years now, into which we dropped our change after using cash to pay for something. Although I use change to pay for things, I seem to be the only one in my family who likes using coins, so this has been adding up. As I was focusing on cleaning off my desk in January, I was reminded of the jar and decided that it was time to do something with it. My original plan was to take it to the bank for a straight cash exchange, but on the way there I decided to stop by the grocery and check out the CoinStar options. I was sorely tempted to change it all over to a Starbucks gift card, but since I was supposed to be giving up pricey coffees this month, and as we were at the beginning of starting a couple of large home improvement projects, I "sacrificed" and went for the no-fee Lowe's gift card instead. The Hubs was happy with the outcome, and the jar is on its way back to filling up again for the next time.

Although my original idea did include transferring money from our checking to savings all month long, when I went to make the first week's transfer, I realized I needed to decide if it would go in our general savings or our Christmas fund. It only took about half a second to opt for the Holly Jolly Savings route instead. I'm always a sucker for gifts, especially with the kids, but this last Christmas (and the ensuing purge of the house) made me realize I want to be more intentional this year, and that not only includes what I give but how much I spend. Much like the ongoing purge of the house, even after the official month ended, don't be surprised if I continue to intentionally add to this pot throughout the year.

When it comes to books and DVDs, I am a fan of saving through buying used. This is nothing new, nor are my treks to the local used book shop. However, I had gotten out of the habit during COVID (buying more through Amazon), and it was only as I was cleaning out last month that I realized I had a rather large stack that I should take in and see about Trading it Out. Although they have become decidedly picky (apparently I'm not the only one purging!), I was still able to trade several books and DVDs for other books and movies that had been on my list. And what they didn't take went straight to Goodwill, along with the rest of the donations.

And finally, as of the posting of this article, it's been 21 days since I last pulled into the drive-thru of my favorite coffee spot. And it's been a doozy of a month, with more sickness, stress, and time spent sitting in my car, waiting on kids, which are exactly the types of days when I feel that I "deserve" warmth and cheer in a Venti cup. However, Curbing the Coffee has not only helped nix the $5 and $10 trips but it's also helped me get a jump start on my summer goals of losing 12 lbs (4 lbs. a month) because even the "skinny" drinks are calories I don't need. I'm trying to view this as a win-win, but honestly, this has been the hardest thing to give up this month.
*   *   *   *
So here we are, month two. Blog post #3 of the year. My car is currently packed with another load to drop off at Goodwill, and my bank account is seeing both incoming and outgoing income, which some days wants to drive me to drink (coffee, people, COFFEE!), but overall I am thankful for the lessons that I've had the opportunity to learn and work on so far in 2022. How about you?
Email ThisBlogThis!Share to TwitterShare to FacebookShare to Pinterest
Labels: #MinimalismSimplified, #my2cents, #NoSpendMonth, #TheTwelve, #WorkInProgress, Financial Stewardship, Little Bites, Project: Simplify