I've been on a bit of a purging kick since the week of Thanksgiving. Before hosting 22 people last Thursday, I went through my kitchen and pantry and filled six large boxes with items to be donated to our local Goodwill.

It was good stuff, nice stuff, never-been-used stuff. Holiday dishes, mixing bowls, cloth napkins. It represented a realistic look at my fantasy life/family that I imagined I would have when I was in my 20s, and the reality of my (wonderful) life/family in my 40s.
I know what kind of mom I am...not the kind that needs 100 cookie cutters. I know what kind of hostess I am...the kind that is a raving fan of the nice holiday paper plates from Hobby Lobby. I routinely choose ease over fuss, simple over hard, and ready-made over made-from-scratch (most of the time...I have my moments).
Since then, the purge has continued. Three more large boxes have been packed up since the pre-Thanksgiving load, including more holiday decor as I've been going through the containers from our basement, decking the house.
I've boxed up Christmas dishes that my mother gave to my grandparents when she and my father were poor newlyweds (a set of four, split between their two parents). One of the plates broke in a move we made 22 years ago, and the other three have been pulled out and used a handful of times since then. They hold memories...for my mom, but not for me. And so they are being passed on to someone who can love and use them, rather than collecting dust in my cabinet.
In many ways, this purge has been more about examining the reasons I've been keeping these things, and less about the items themselves. It's not about whether they are useful or beautiful (a la William Morris), rather, it's asking myself if the only reason I'm holding onto them is for the memories associated with them, even if they aren't my memories. What I'm realizing (thanks in part to Let It Go: Downsizing Your Way to a Richer, Happier Life by Peter Walsh, $4.99 for the Kindle version as of the time of writing, and worth it if you're simplifying, downsizing, or preparing to move loved ones), is that the memories are enough...I don't need the things too. 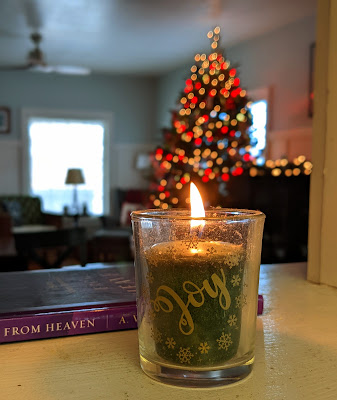 While working on dinner this week, I looked up and "saw" this candle on the ledge of the pass-through window to the dining room. I say "saw" because it's actually been sitting in my kitchen ever since a friend gave it to me for Christmas...several years ago. I've seen it almost every day, but never took the time to do anything with it. It just sat there, as life went on. But as I looked at it this time I suddenly knew...it was time. Light the candle. Enjoy the smell, the flame, the reminder to find JOY at that moment. And when the moment is over, toss or pass it on.
I am thankful for these simple truths that are being revealed to me this holiday season. Find joy, use it up, share it with others, enjoy it, and cherish the memory without holding onto the stuff. Life, and specifically Christmas, is about so much more.
Email ThisBlogThis!Share to TwitterShare to FacebookShare to Pinterest
Labels: #HouseToHome, #iamthankful, #MinimalismSimplified, #my2cents, #NoSpendMonth, #TheTwelve, #WorkInProgress, Financial Stewardship, Goals, Project: Simplify