What's On My Nightstand: January 8-12

For Christmas, the Hubs got me a t-shirt with a warning to everyone who sees me wearing it: Please Do Not Pet the Peeves. We both got a good chuckle out of it as I find myself face to face with more and more peeves that I didn't know existed. For example: people who rave over a movie and then look stunned when I say, "The movie is okay, but the BOOK is amazing!" I find myself surrounded these days with some little (and not so little) people who are only beginning to grasp the fact that the movies they love (Anne of Green Gables, Little Women, Pride and Prejudice, Lord of the Rings) were all books FIRST, long before they were movies (and then remakes of those movies, and remakes of the remakes...). 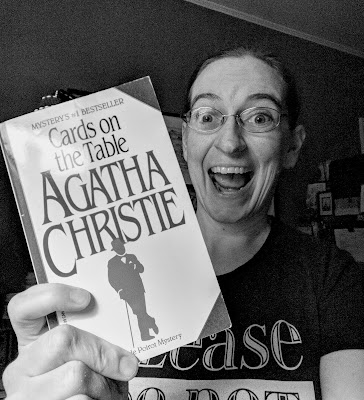 Recently, folks are starting to talk about Agatha Christie, even if they don't seem to realize it. In 2017 Hollywood produced two films based off of her books, Murder on the Orient Express, and Crooked House. People are talking a lot about these films - especially Orient Express - because of the number of high level actors who are involved, but so many folks don't seem to realize that they are based off of the work of an incredible 20th century female author.

I've been a fan of Agatha Christie since I read my first Hercule Poirot mystery back in junior high. Already a fan of Sir Arthur Conan Doyle's fictional detective, Sherlock Homes, I'd read through all of those stories and was on the lookout for something "new" to devour. I don't remember how I stumbled upon Christie, or even which book I read first, but as soon as I "met" the fastidious Belgian detective and his "little grey cells" I was hooked.

I've lost track of the number of times I have read through my personal collection of Christie mysteries (they take up a shelf and a half in my library), but they never get old. Favorites definitely include Murder on the Orient Express, And Then There Were None, The ABC Murders, last week's nightstand visitor, Appointment with Death, and today's current nightstand addition, Cards on the Table.

For the record, I am a fan of David Suchet as Hercule Poirot on the BBC TV show, Poirot (though they took more and more liberties towards the end of the series), but if you've only seen the show or movie (of any book, not just Christie), please go discover the unblemished version, the way the author intended it before Hollywood took over. And please... do not pet the peeves.

What are YOU reading?