You know me and you know how excited I can get over saving money or finding a sweet deal. It usually causes me to do the "Happy Dance". However, this last week I learned a valuable lesson (again)...just because you find a super-sweet "deal" does not mean that it's the best bang for your buck. See these shoes? 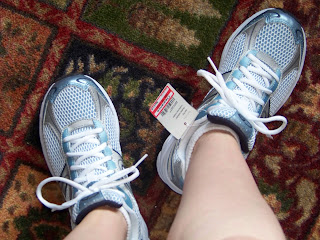 I have three older pairs of New Balance running shoes that have been to Africa, Indonesia, around the U.S. and back home again, only to be walked in religiously while trying to lose weight. They are pretty yucky looking even though I try to rotate through them and "the bounce has gone from [their] bungee" (Wondering about the quote? Watch Wallace & Gromit - The Curse of the Were-Rabbit

). I've been looking for new shoes for over a year, but the price-tag on most of them (specifically the New Balance styles that I find so comfortable) have sent me right over the edge. There is no way on this earth that I'm going to pay $90 for a pair of shoes. Or $60. I'm looking for $40 or UNDER. Yes, I am cheap, but this past week-end my standards flew out the window as I was browsing around my favorite store, Target. It's never good for me to have time to wander aimlessly and I had four hours to mess around while waiting to pick Peter up. At 8:30 on a Saturday morning, the only store open was Target. Hello red clearance stickers. I have missed you.
While walking through the shoe department (who knows why because I do have an aversion to buying cheap shoes - they don't last and they usually hurt my feet), I found a clearance end cap and saw these Champion athletic shoes. In my size. On clearance for $13.98. I even liked the color

. I tried them on, walked around in them for a few seconds, decided that for $13.98 they would work great, did the happy dance and took them home. 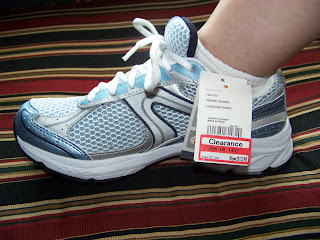 I showed them to Peter and expected him to be impressed. You would think after ten years I would know better. The conversation went something like this:
Peter: "You just wasted $14..."
Me: "$13.98!"
Peter: "Whatever...$14 plus TAX."
Me: {mumble}
Peter: Anyway, you wasted $14 on a pair of Champion shoes - they won't be comfortable."
Me: "Yes they will! I tried them on in the store and they felt fine!"
Peter: "Fine? But not great? Nope, you should have put that $14 towards a pair of good New Balance. I don't know why you do this."
Me: "Well, I haven't taken the tags off of them yet. I had all the same thoughts, but if they work then I've only spent $13.98 {plus tax} and I have a new pair of shoes!"
Peter: {Sigh} "OK, but don't say I didn't warn you."
Ha! What does he know? A lot. As always. You know those old cartoons (or even more recent, The Emperor's New Groove

) where they show the shoulder angels telling the person to do something good or do something bad? Well, I have always laughed and told Peter it's like he is sitting on my shoulder when I'm shopping. When I tried on the shoes and decided to buy them, I already could hear Peter's voice in my head. And deep down I had my own concerns, but I pushed them aside in favor of that beautiful red sticker. So I left the tag on the shoes and wore them around the house for about an hour. It didn't take longer than that for the bottom of my foot to start hurting. He came in as I was threading the elastic connecting loop through the shoes and said, "What happened?" "They hurt my feet." "Are you going to return them?" "Yes." "Okay, we can do that tonight." I'll say this for him - he's really good about not rubbing it in - but then he didn't have to. I knew better but I bought them anyway.
So what have I learned...again? Well, cheaper isn't always better. I realized that the cheaper shoes were not as comfortable as my "old and busted" New Balance that I paid more for at the beginning. Although they aren't as springy, they are still comfortable, they don't have holes in them, and they are paid for. I returned the shoes to Target and walked out with $15.31 ($13.98 + TAX!) in my pocket and vowed not to let those red stickers cloud my judgement again. I've tried on other athletic shoes at T.J.Maxx since then and now my standard is: Are they as comfortable or more comfortable than the shoes I already own? Not yet.
All Amazon links are part of the Amazon Associates program.
Email ThisBlogThis!Share to TwitterShare to FacebookShare to Pinterest
Labels: Financial Stewardship