I wrote about my summer beach reads last month and when they arrived I couldn't help myself - I had to start reading one of them. I picked the one that a friend suggested I might like - "Hotel Juliet" - and dove right on in. Within a few chapters I was pretty sure this was not going to be a book I would be able to recommend and had I not been curious how it would play out, would probably not have finished it. 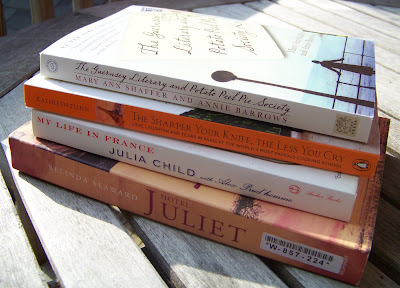 I was hoping something would change so I could tell you it was a "must read", but I just can't. No offence to my friend who originally talked about it, but I didn't like the plot, the characters, or the writing style. In fact, there were several times I was totally disgusted with where the author took the story. I think one of the things that frustrated me the most was that the book had some excellent bones and could have been taken in many directions that would have, in my opinion, made it so much better. When I talk about the writing style not being to my liking, I mean that the author seemed to have a need to use metaphorical language in the vein of Harlequin novels that certainly, for me, did not add to the plot. When one or two descriptive words would have sufficed, the author would use ten to explain the way the wind and pavement looked and felt or use lusty language to describe the sensation of the airplane flying through the air.

If you still want to read the book, then look away because here comes the spoiler summary: There was a (perhaps incompatible) marriage and a summer move to Africa. This was followed by a flirtation, some odd jealousy, and finally an affair just prior to the (accidental) death of the unfortunate husband. After many years of separation the book concludes with a unsure future and a semi-happy reunion (of the couple who had the affair) back in Africa. Had I known more about the story, I would not have spent money on this book...thankfully I only paid $0.16 (plus shipping) for it from a used book seller on Amazon. My final impression of it was that it was a dark novel with a gloomy feel and I'm glad I read it before I went to the beach instead of settling in with it there and being disappointed.

Also, in defense of my friend, I feel the need to add that prior to suggesting this book, she advised that it was "not for everyone" - on this point we totally agree! :-)

I don't like to end on a negative note, so let me list some positive things about the book (and there were some!). I enjoyed the involvement of the airplane and how flying works. I think the title of the book, "Hotel Juliet", is very clever as it is the registration number of the airplane. Since I have spent a lot of time around airplanes and working in aviation, I thought that aspect was delightful. I liked that it was set in Africa - and more specifically in a country where I have spent a small amount of time, Zambia. I could easily picture the scenes as the author described them and it made me feel nostalgic for our time in Africa and the friends we made while we were there. As I said before, there were a lot of good bones to the story - if only the meat had been better.

I've been super busy the last few weeks and haven't had time to get much reading in (besides this book), but I've got a week to finish my June Booking It selection (A Connecticut Yankee in King Arthur's Court

Book links are part of the Amazon Associates program.
Email ThisBlogThis!Share to TwitterShare to FacebookShare to Pinterest
Labels: Bookworm