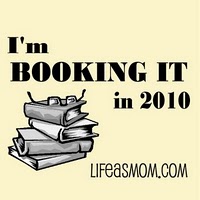 I started my November book, Amusing Ourselves to Death

, in mid-October while spending evening after evening at a job site where hubby was working on electrical stuff. I was cruising through it, until I hit a brick wall - another book

that stole my attention, and after that, a hubby who needed actual hands-on help (not just a wife in a camp chair with her nose in a book). So when I realized yesterday that the November Booking It report date was upon us, I realized I could either hurry up and finish the thing or put off writing a review until December. I just couldn't put it off - so last night I curled up with my book and a blanket and today I'm sharing my thoughts about...

Amusing Ourselves to Death: Public Discourse in the Age of Show Business