In June of 2009, our library was the subject of a photo shoot for USAA.com magazine. Specifically our bookshelves (which Peter designed and built). The point of the article was how we had been able to renovate the room on a small budget and what we had done to get the most bang for our buck. Since so many of you voted (in my poll) for more DIY projects/ideas, I thought I would oblige with this one. Yes, that's also us (and our house) on the cover. It was our five minutes of fame. 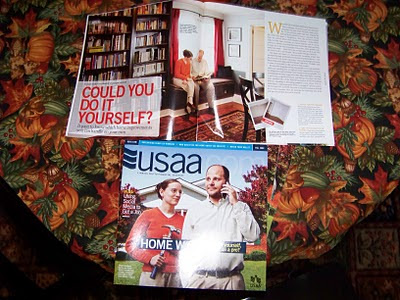 You have probably figured out by now that I like books. {cough - understatement - cough} What you don't know is that the last time we moved, Peter informed me that if we ever moved again, he would do everything in the house EXCEPT move the books. That was my job. Obviously, we will have to die in this house because I've only collected more books since that move 10 years ago. So many that I was fast running out of room to store them and I started begging Peter to build in some really nice wooden storage shelves for my collection. I was informed that once those shelves were filled, I couldn't buy any more books and I certainly couldn't start stacking them on top of each other. I think he hoped rather than believed that would stop my book-buying. At any rate, let me get to the point of this post (too late!) before I kill you with pointless details. I've always wanted a library like this:

Library at Biltmore House in Asheville, NC
Obviously I'm not moving into the Biltmore anytime soon and I won't be housing a book collection quite that large in my lifetime. However, what book-lover among us doesn't drool over a room like this? And even though I won't be acquiring a Biltmore-esque library any time soon, I did want a library in our home for the books in my care. Peter came through for me, but I'm pleased to share that the idea behind the shelves themselves was totally mine.
While meandering around Lowe's (a very dangerous thing for me to do because I can come up with a project idea in mere moments), I started thinking about book shelves and my handyman hubby agreed that we needed to do something. Although he doesn't have many pet peeves, Peter can't stand sagging shelves which meant that we headed straight to the hardwood section. However, the cost of one board of hardwood was enough to send us both into orbit. 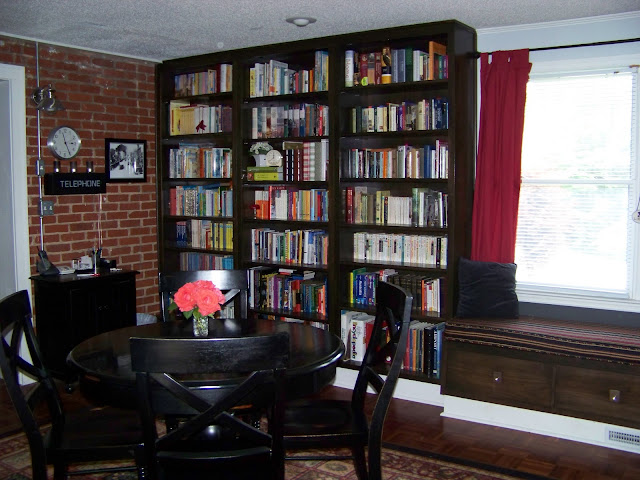 Just when we were giving up hope, I walked around the corner and spied poplar stair treads. They were already finished on the front (rounded nose), they were solid wood, and they were loads cheaper than the boards we had previously discussed using. Peter was able to use the stair treads for the (non-sagging) shelves and built the boxes (if you will) out of cabinet grade plywood. He also used poplar for the front frames and finish trim. Each bookcase was built in his workshop and then brought to the library where he installed them to look like they were built-in directly. We were exceedingly pleased with the results after it was all stained, trimmed out, and in place. He also designed and built a bench under the window which gave me a place to store all of our games...and a nice place to read with the windows open on warmer days. 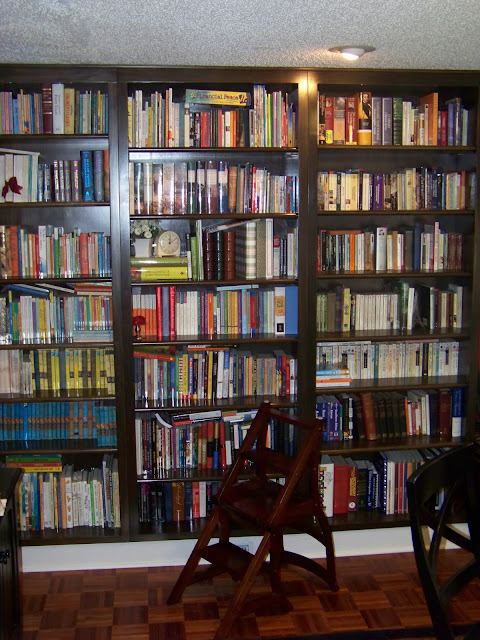 The only problem now? I'm out of book room and bugging him to build a matching set for the back wall of the library. {grin}
Email ThisBlogThis!Share to TwitterShare to FacebookShare to Pinterest
Labels: Bookworm, DIY Project