Once upon a time (10 years ago), there was a young couple with a furry 6 week old St. Bernard - all seeking a house that they could love and shape into their own little home. You might recognize them. 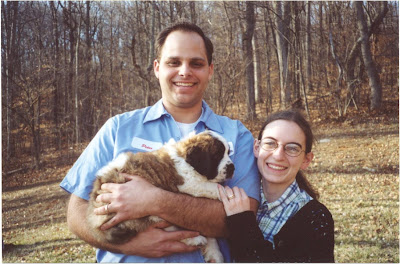 The couple had a laundry list of must have items. No house was considered that didn't have a fireplace, 3 bedrooms, 1.5 baths, central heat/air, brick exterior and a large yard (for the dog). Oh, and within their small budget. Picky? Perhaps. Unsuccessful? Totally. The search continued and after two months of living with the in-laws, their list changed: four walls and a roof would do, and if those walls were brick and they happened to have a backyard, the {happy dance} would ensue.
Almost past the point of despair, the discouraged couple drove up a street they had previously missed, right in the center of town. That's when they spotted "it" - after rubbing their eyes and wondering if it was for real, they called the realtor and asked how much it was - $500 under their budget.
The next day, the realtor showed them all over the house and the couple began dreaming about what they would rip out first (the kitchen). After she fell in love with the upstairs (glass doorknobs and all) and he fell in love with the basement (tall enough to stand up in and use as a workshop), all they asked was where to sign. No fireplace, one bathroom, two bedrooms, no central heat or air...but it was brick and it had a huge fenced-in yard. More than that, when they first walked in the front door, it felt like they had come home. 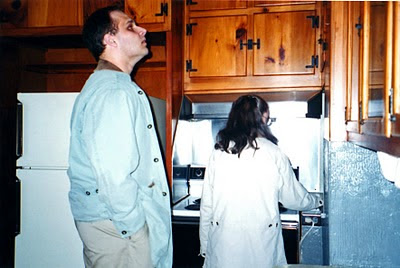 And so the decade-long home improvement project was started...and continues to this day. Stay tuned for more stories of what we did, what we would never do again, what we learned, and the dreams we have for our little home in the future.