I've got a post going up on Valentine's Day in which I debunk some Valentine's myths, but right now, I'm recommending some of my favorite films to watch for the Holiday o' Love. We've got a whole week-end between now and the big V-Day, so there's plenty of time to get one or ten of these watched. If I've missed one of your favorite flicks, please feel free to tell me about it in the comments!

Do I really need to explain why this one made the list? I mean, it's just one of the most romantic movies of all times, and I never get tired of seeing Tom Hanks and Meg Ryan together on screen. Plus, her clothes are so cute in this one!

{2}
Runaway Bride
This movie came out while we were living in Boston and there are lots of good memories associated with this film. Love the soundtrack, and love the idea of finding the perfect person for you, rather than becoming the person you think they want. Be true to who God made you!

While I like the original of this film, I think that Ford, Ormond, and Kinnear hit a home run in this 1995 remake. And what could possibly be more romantic than Paris?

While we're on Paris, I think this film is rather romantic in it's own way. It's showcases the love between Julia and Paul Child and Julia's love affair with food and cooking. It also touches on love lost and re-found in the modern day story of Julie Powell and her husband. While I'd pass on the book, I would absolutely recommend the film.

{6}
The Importance of Being Earnest

A few tweaks here and there, but over all it's a brilliant adaptation of an equally brilliant play with the perfect cast.

Easily one of my all-time favorite films, but then most films staring Cary Grant would make my list. I love the fast repartee between Grant and Hepburn, the overnight love affair between Hepburn and Stewart, and the snippy comments from the kid sister.

Yes, more from Oscar Wilde - perfect for this romantic holiday with delightfully quotable lines and an outstanding cast. 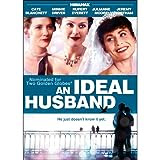 No list of romantic Valentine films would be complete without the movie that ENDS on Valentine's Day! A favorite of mine for many years, it seems fitting to end the list with Hanks and Ryan in one of their earlier hits. It's the reason that Peter and I say things like "MFEO" and listen to Harry Connick, Jr.

Okay, so what did I miss? What films do you think personify the holiday of hearts?

Email ThisBlogThis!Share to TwitterShare to FacebookShare to Pinterest
Labels: Film and Television, Holidays